Unlike whipping cream, a kiss from mom, or a $50 bill, clowns never make it better. So in the spirit of pre-holiday dread and the interminable suffering that is Friday…have some clowns.

Don’t bogart that seltzer water, man. Pass it around, let everybody have a squirt. 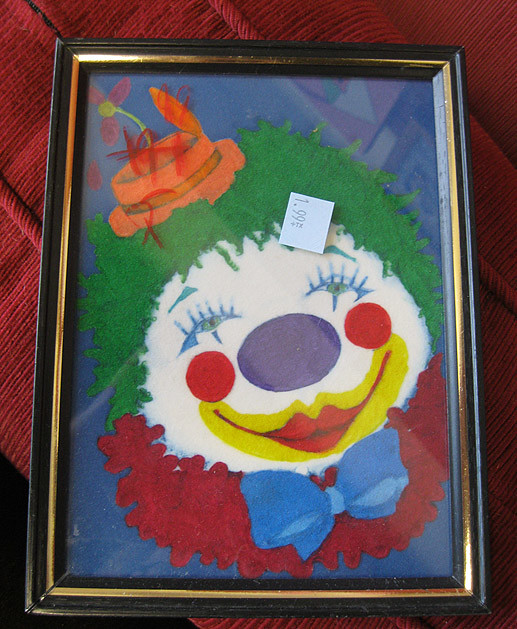 Smiling on the outside, blitzed out of her gourd on the inside. She’s decided that the only way to properly experience circus life is to experience as little of it as possible.

Wow. It’s like there’s TWO elephants. Did you ever think that if you were wearing the hat,Â you’d be the ringmaster? 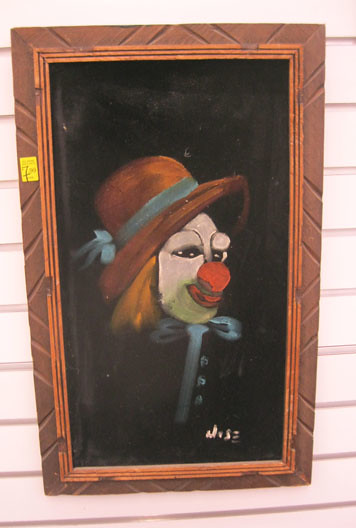 Only the head. No body, just a clown head on some sort of blue stem. The stamen of a flower that does not want, under any circumstance, to be fertilized.

Velvet paintings have a lot to answer for, but I can’t blame this on the velvet. Limp mass-murderer hair, eyebrows that are hideous growths over black pits of eyes, and I’m not sure exactly what’s going on with those lips, they might be operable. There isn’t a hat big enough or fetching enough to conceal this. Give up, hat.

Blitzed clown from the Round Rock Salvation Army, Clown of Great Smarm from the Thriftland near Stassney and Manchaca, Austin