I don’t know what horrible disease this poor cat got. A really bad case of 50s dinerÂ aesthetic, perhaps. Or maybe a good old-fashion drowning, complete with ruffled billowing drapery for that “Ophelia” look. Only with more bubbles, and a ghastly oxygen-deprived pallor instead of Ophie’s creamy off-white. 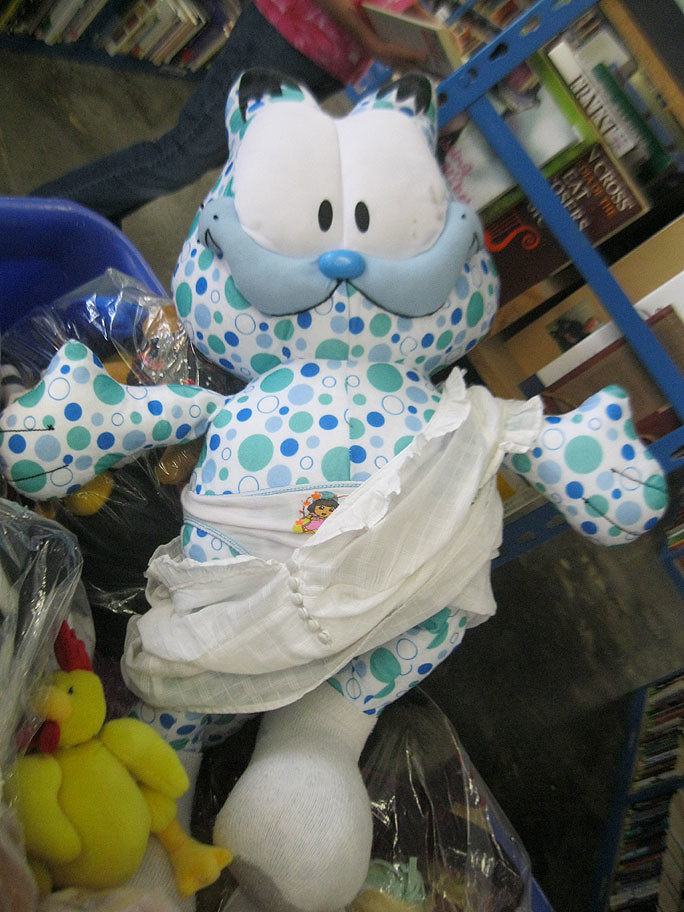 Protip: Nobody’s modesty is preserved by a pair of “Dora The Explorer” underwear, except possibly for a three-year-old girl’s. Dumpy middle-aged cat? No, it just won’t playÂ in Peoria.

The “risen Messiah/Botticelli’s Birth of Venus” look also isn’t working with that huge, canary-eating grin. Which ALSO doesn’t work with the “Dora” panties, but who’s counting.

Overall, I’m really wondering what percentage of this is commercial, and what percentage is Grandma’s bad idea? 60/40? 20/80? The face looks like a plastic mock-up from a kit–I wish I could remember, it’s been a few years since I took this. The rest of it looks like what was available in “remnants.” For instance, the choice of terrycloth for the feet? Probably not “Paws, Inc” approved.

Incidentally, “Paws, Inc” has a link on their page called “Ten Reasons to Partner with Garfield.” Think of one yourself. Think of another. Eventually, life becomes full of regret and drunken lasagna binges.