I have never seen anything so happy as this…whatever. So I want to share him with you, since it’s Monday and all, and you’re a good person and deserve good things.

This may not be a good thing. It may be an excessively cheerful blue poop, but let’s be optimistic. 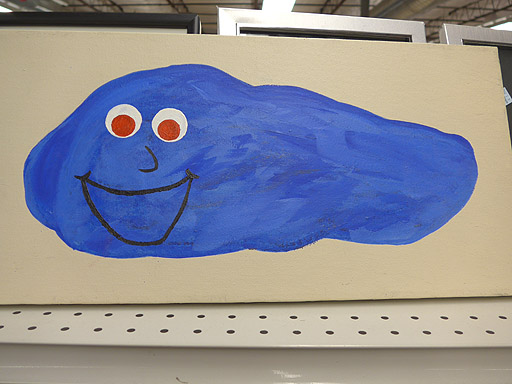 This looks like it’s sort of semi-abstractly representing a fist puppet. Or a finger painting, if the artist’s hand was the titanic fist of an ogre, or the world-weary mitts of the Titan Atlas.

But mostly it looks like cheerful blue poo. Poo that’s about to burst into song, or may already have done so. There’s a song in its heart, and it’s going to sing it. It’s got to. At this point, you’re better of going with it instead of fighting it, it’s Monday anyway and you’ll need to conserve your energy to get to the coffee pot.