The Great Weedstack Has Spoken

If you haven’t had a chance to own your own 5″x5″ section of swamp, well, now’s your chance. Fresh from the verdant green margins of the silt flow behind Harlan Manufacturing to a flower pot to Goodwill to you, it’s…one of these. 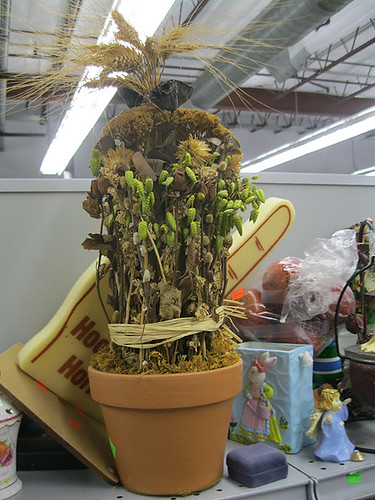 The giant foam hand is for size comparison. It’s as big as that particular foam hand.

Broadly, this is in the category of “harvest art,” where dried weeds and bits of frondy detritus substitute for actual greenery, live a lot longer, and contain valuable, pest-controlling arachnids. Unlike actual, living plant-based centerpieces, these only shedÂ some. This one, however, is a bit less cornucopia overflowing with wheat and squash, and a bit more “pulled from actual Louisiana.” Maybe it’s the drooping green things that tilt the balance. 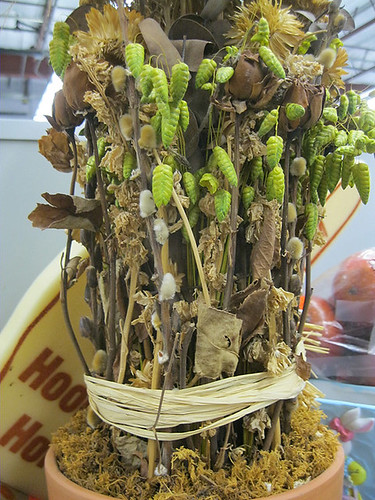 Or maybe it’s that the entire thing looks like something that was growing in the loamy floorboard of my father’s Jeep Wagoneer after the rainy season. Erk. It even has the peat moss. 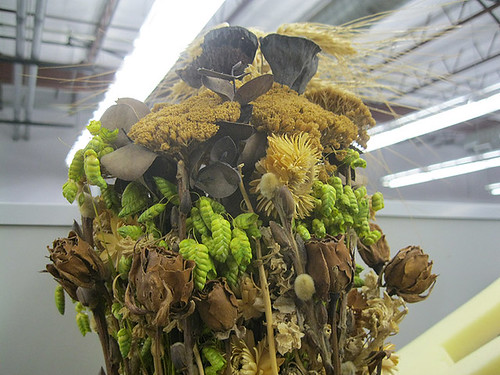 Somewhere, a single pussywillow bud makes a desperate bid for freedom. It struggles free, bursting from the dense “foliage” with a distinct popping sound, until a single pinkish tentacle lashes out, wraps itself around the floret, and yanks it, firmly but precisely, back into place. No, no. Nothing out of order. This isÂ nature, people.