Things That Are Round

The most interesting thing about this collection is not its constituents, which are your basic “you there, with the spare time and too much cash, paint this” sort of plaster-and-glaze mess. It’s the volume, and the roundness. It was like a wall of pleasantly plump on display, gentle curves amassed and friendly. 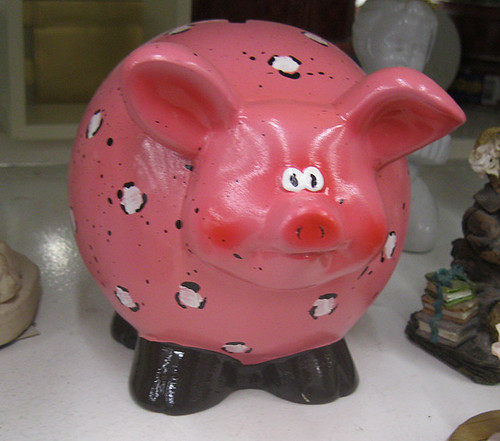 Firstly, I would like to welcome back Shelfpig, though this is a pretty tame one by the full spectrum of Shelfpigs we have encountered. It wasn’t attacked by a cheerful tattoo artist with a thing for permanent Tammy Faye Bakker makeup and hearts, the natural state of a shelfpig. It DOES appear to have a bad case of pigpox. Also it is an almost perfect sphere, but that is because it is filled with delicious bacon, and this is a feature, not a bug. The same cannot be said for its friend, the fish. 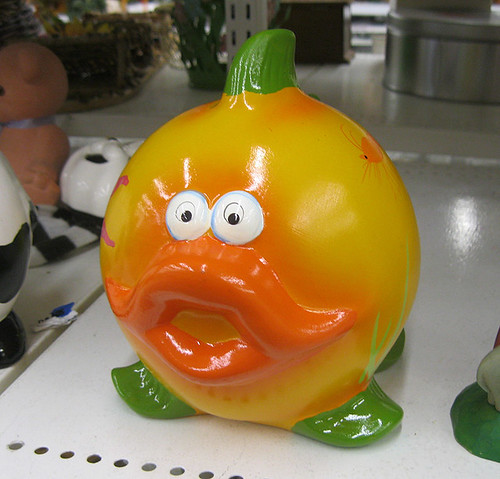 The fish fills me with horror. Oranges shouldn’t smile, or goldfish shouldn’t have terrible birthmarks. They should be gold. If one of them has a starfish on its side, it’s probably not long for this world.

I recall our first aquarium, when it was decided that five-year-old me should be in charge of feeding the fish. Our goldfish DID end up looking kind of like that, but they didn’t smile, mostly they bobbed at the top of the aquarium. Absolutely no smiling was involved,Â ever again. 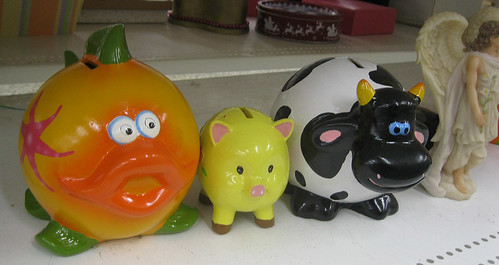 Oh look, two more deliciously round hoofed mammals. Not sure if that’s a pig or a PokÃ©mon though in the middle. It might be a lemon with hooves, and therefore an example of mankind playing god, and blasphemous. Also, who serves bacon with lemon?

Sung to the tune of “Lucy in the Skies,”

Picture yourself in a field or meadow,
With mass-produced flowers and glazed butterflies.
Something crawls toward you, a wonder or horror;
The bug with the bowling pin eyes. 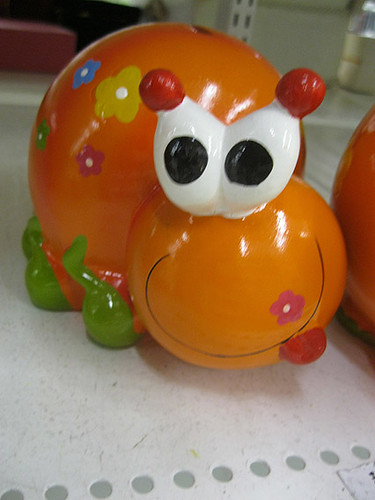 It’s probably not going to eat you, because it’s cheerful-looking and obviously eats flowers. That being said, I wouldn’t want it crawling on me, because it might explode at any moment, and it weighs two pounds even before you fill it with pennies.