So, one time I saw, in package, a “life doll.” It was really creepy–a full-sized lady person in a big plastic canister, presumably ready to assist with any number of base needs and desires, although she’d probably want to get out of her big canister first. This is kind of like that. Except instead of catering to carnal lusts, I think she’d want to, you know, make some really good soup, or maybe sing a short aria, possibly play a flute. 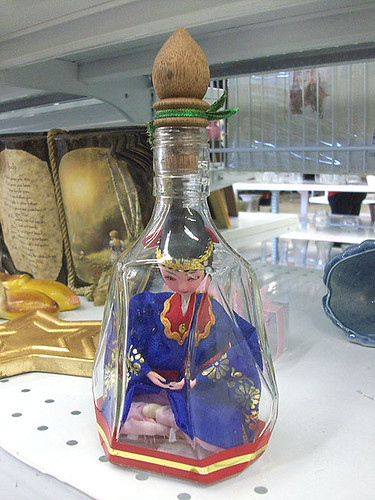 If you’re going to be sealed in a bottle, it’s good to dress for the event. Maybe get your hair done, pick up a new dress that highlights your eyes, you know. It’s really kind of a tragedy that she ended up in Goodwill. At least she was in “brick-a-brack” and household decorations instead of in kitchen goods, beside the bottle of pickled garlic and peppers.

Damn. Now I wish I’d moved her to kitchen goods. “Not for internal consumption…” 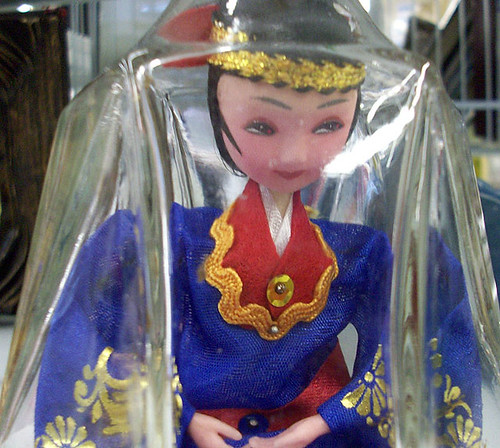 Break in case of an emergency need for a sharp but courteous rejoinder. 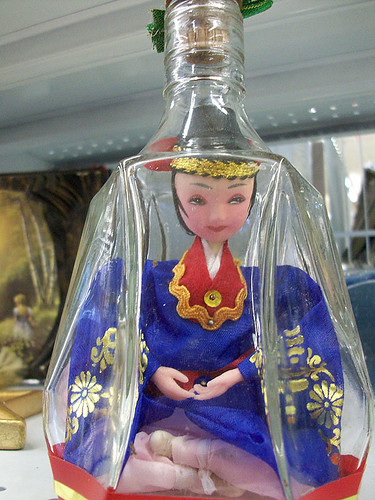 Such patience. Mind, she’s starting to look a little cross in this final shot. I think she was waiting for me to uncork her so she could get out and stretch for a bit. You can tell, though, she’s starting to snap. Any second now she’s going to change the position of her hands, and that’s when you know this isÂ over.