There are many things at Savers that I wouldn’t want to anger. In most cases, these are employees, who sail the aisles like mighty warships or float like mines tethered to their registers. But occasionally, I find a piece of merchandise that I would, on the whole, prefer to maintain a good relationship with. And this was certainly one of those times.

Because whatever this is, I want it to beÂ happy. 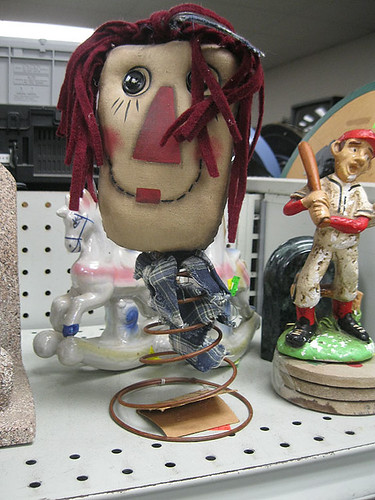 Asian folklore–and the original Monster Manual, not that later crap–talks of the penanggalan, a vampirish sort of creature comprising a flying head, with entrails dangling below. This is kind of the “Raggedy Andy” version, where Andy’s clothy head tears itself free and bounces along on its spring.

Not that I think Raggedy Andy GENERALLY has a spring, but this one does. And he uses it to bounce around the toy store late at night and help him get to fresh, stuffing-filled victims, so he can drain the fluff from their bodies. In the dead of night you can hear him…boing…boing…boiiiinng…and then silence.

Not really that sinister, I’ll give you. Pretend you’re a stuffed animal, it has a bit more of aÂ frisson of terror.