We were pleased this year to find Christmas available in convenient 12 and 18-oz bottles.

This first one, though, is not bottled Christmas. It’s bottled starfruit. But with the lovely (?) red peppers that look like a cross section of a cow with really bad capillary seeding, I think the stars are quite festive. One wonders occasionally how much of the world’s starfruit ends up in glass tombs…75%? The entire starfruit market? The tragedy of being anÂ aestheticallyÂ pleasing fruit is that you’re continually rendered inedible :( 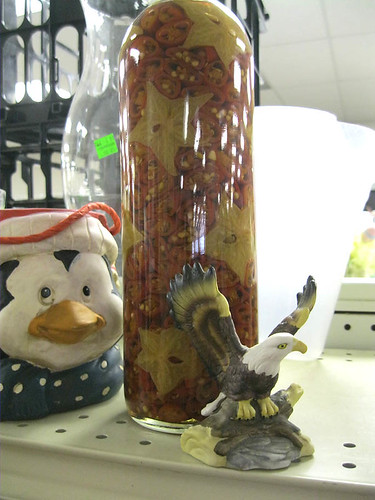 See, I know it’s a Christmas starfruit because of the penguin. The eagle’s throwing me. In a certain light, I guess it could be patriotic, sort of a “Starfruit and Stripes Forever” thing. Maybe the gods planted this bottle of starfruit and peppers on the ground with a mighty crack like of thunder, and the eagle is fleeing in terror.

On the subject of terror, though, this is not aÂ happy bottle. I’ve never seen peppers scream before, and the starfruit’s looking a little alarmed itself. Poor thing. “Let me out! I am not a pepper! I am a carambolan being! 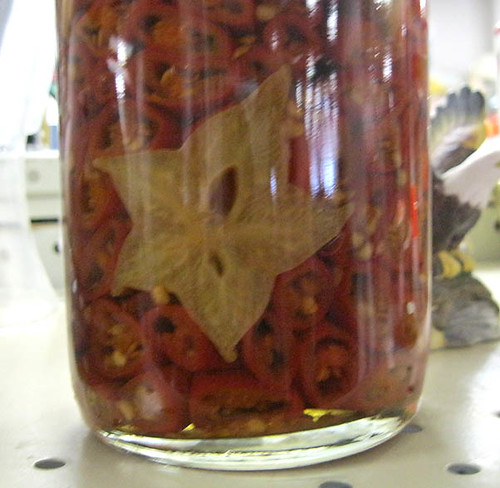 If you just uncork it, you know the full Christmas experience will wash over you in a pine-perfumed flood. Or maybe you’ll just get mineral oil on your hands and leave translucent fingerprints all over the gift wrap. Best to just leave this one corked. 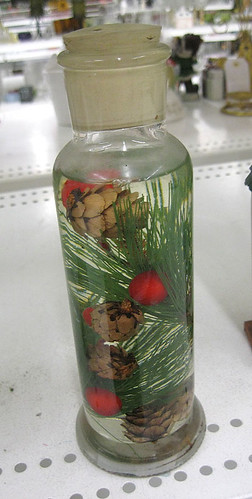 Santa probably keeps a couple of these stashed away to make it through July. “Just a few thimblefuls of christmas magic…Mrs. Klaus doesn’t have to know.” But she knows. He gets the pine needles stuck in his beard. And contrary to popular belief, Santa is not a right jolly old drunk. He’s more a maudlin type, give him a couple bottles of Kringle’s Finest and he’s singing “In the Bleak Midwinter” on the porch with Donder. 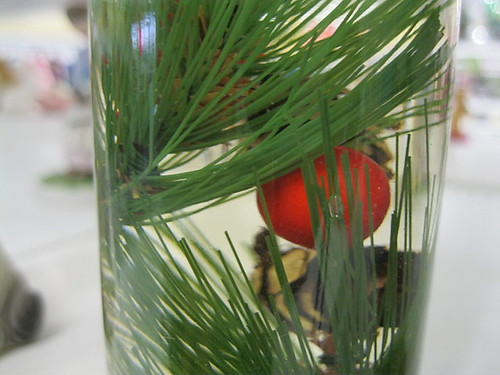 Mathematicians have worked out that Santa travels at a bare minimum of about 340,000 miles per hour. At a speed like this, not only would the lead reindeer burst into flames, but houses may well tumble and swirl in the wake of his mighty passage. Â Although this particular image makes it look a bit like Santa’s actually folding spacetime into a bottle shape, which is, really, not what’s happening. 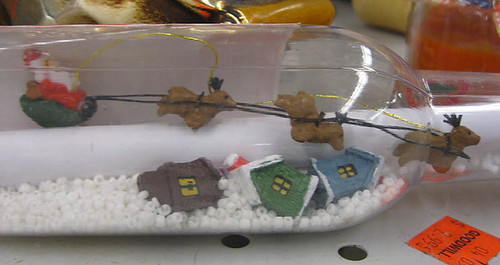 After the reindeer trashed Old Man Carlton’s house, they attempted to flee the scene of the crime. Their escape was caught on high-speed film. Santa was no-where to be seen.

I am a little curious what that note says. “Santa has discovered the secret of lightspeed travel. DARPA must purchase eight tiny reindeer. The elves have spotted me, if I do not return home give my wife my season’s greetings.” 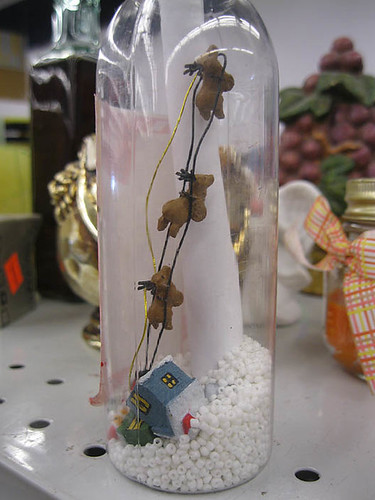 Step one. Cut circle out of seasonal fabric. It really doesn’t matter what, this is a craft for the entire year. But let’s assume Christmas.

Step three. Cover jar with cloth and close lid. [Christmas or festive season of choice] magic! Now take a dozen of them to that store that sells crafts from the local retirees community. They’ll thank you and put a $5 pricetag on it. And you’ve made a better world, and a tidy profit margin for them! 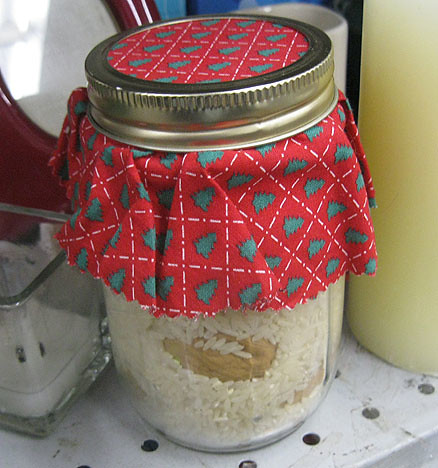 If you don’t have Walnuts, feel free to get creative! We do not recommend fresh fruit, as it is likely to deteriorate if the jar is not opened promptly, and in every scenario we can imagine, it will not be opened promptly. Go with dessicated things–apricots, large dried ants, and so on. The end result will not be particularly less seasonal than walnuts and rice. 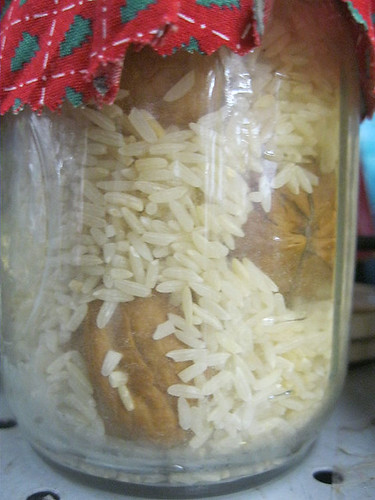 On the plus side, with the rice acting as a dessicant and preservative, your craft is likely to remain in this precise level of edibility for many years to come.