With apologies…I like to dredge up the bad Native American stuff around Thanksgiving. And Columbus Day, too, but I can never remember when Columbus Day is, and then it’s past. If there’s not a movie of the week to mark an occasion, it didn’t happen.

ThisÂ remarkable set popped up at the Salvation Army near Anderson Mill and 183. It’s sort of the “Three Wolves Howling” of soppy depictions of Native Americans, so washed over in a warm golden glow of Â  new age nostalgia that Yanni is already prepping a musical score for the occasion. It’s like someone’s grandmother saw “Pocahantes” and said “…yes.”

It’s not so much that these are bad, or particularly unpleasant, the overall effect of them was just awfully insipid. Maybe you had to have been there.

This first one I think of as “Proud Warrior Hunts Pricetag.” 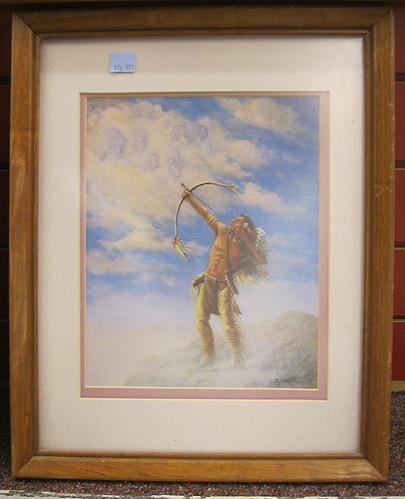 It’s all well and good to have the hunter raising an arrow. But what is he shooting at? Clouds? The inset peach mattboard with bevel cut? Tomorrow? If you can actually shoot down tomorrow, that’s pretty cool, though good luck blogging about it. On the other hand, there’s some weird sh*t in the clouds.

“The dark fire will not avail you, flame of UdÃ»n. Go back to the Shadow!” 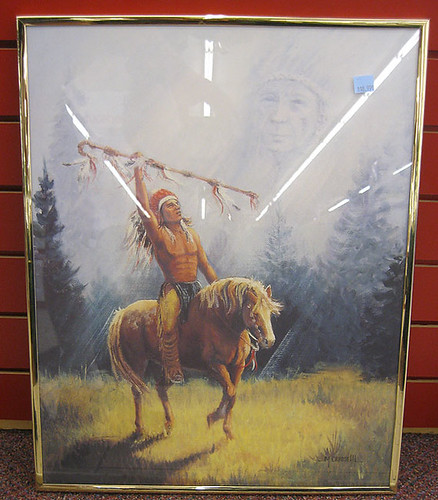 “You Shall Not Pass!”

I like the way the glare from the glass radiates out from him like some sort of crazy aura. It’s like he just popped out of warp speed to show Grandma Palpatine his new stick. “Hey Grandma! Look! The new model has FEATHERS!”

Lastly, a note for cosplayers: Make your loincloth out of heavy-duty materials, not a scrap of leftover leatherette. Otherwise, loincloth malfunction. 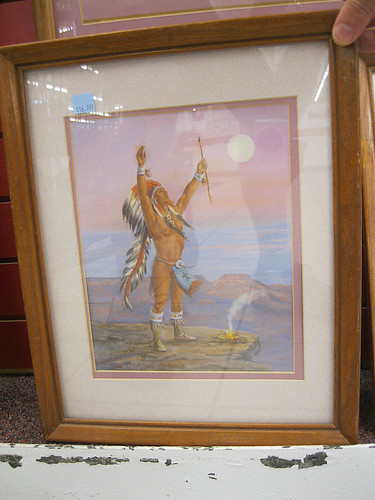 This loving closeup is for theÂ ladies.

Or rather, mostly for me. But perhaps the ladies might find it of some educational merit. 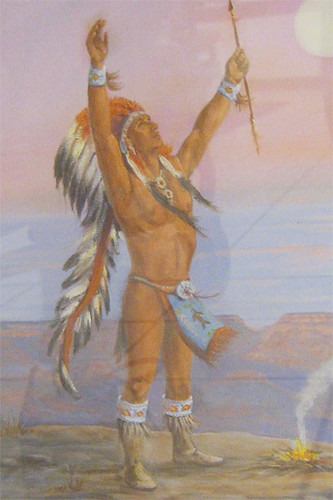 Remember, the higher the loincloth, the closer to god. As in 80’s hair, so too in skimpy, barely-concealing costuming. I just hope there was the sound of a slide whistle just before the camera snapped this one.