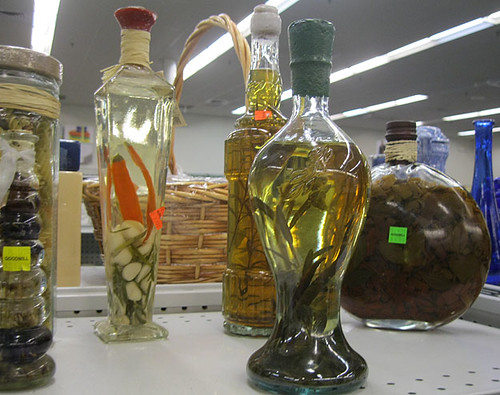 “Things in oil” are the holiday fruitcakes of the thrift world. You can’t quite get rid of them with a clean conscience, but you definitelyÂ don’t want to ingest them. Although a proper fruitcake will stay in roughly the same state of edibility through the procession of the years. Things in oil–no, you can see their slow decline. Over time, they grow fur. 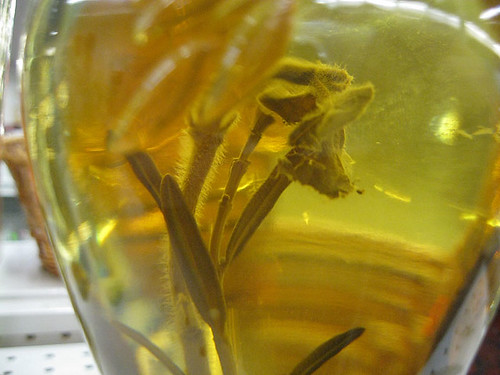 Statistically, this is rosemary. Although at this magnification it looks like the paw of some tiny animal drowned in a vat of canola oil and then bottled. This would not change the edibility of these products–really, they’re for decoration only–but a little mouse or vole drowning in amber liquid like some ancient bug on a tree isn’t exactly decorative. And, frankly, neither are rotting flowers. 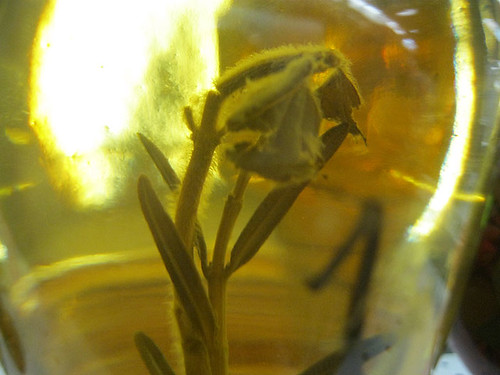 Somehow this thing’s gathered a thick layer of dustÂ inside the bottle. Does the bottle allow dust osmosis? After five years on the back shelf, did the dust move into the bottle just so it had somewhere to be? Or did the bottlers (The Greater Food-Like Substance Bottling Company of Hanover, Michigan, I think) roll the rosemary in grot and then encant it, just to lower your expectations? “Sure, it’s a little foul-looking now, but think of how it’ll look in six years! About the same!”

I love a good soft-sell.

I’m not going to argue that the following item is a horror. But it is kind of sad. 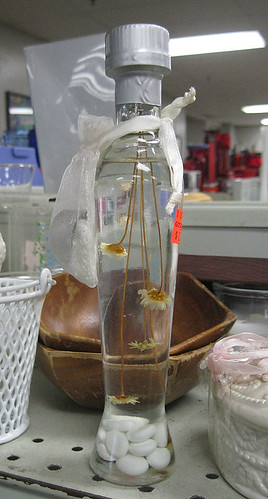 This is what happens to daisies that piss off the mafia.

I can almost see the ad copy. “Buy some crap for mom this Mother’s Day. She won’t use it, so we don’t care! Hell, we don’t even know if you’re supposed to bathe with it, drink it, or make it into a candle, but it sure as heck has flowers in it!”

Rancid Rosemary from the Goodwill on Parmer near I35; defeated daisies from Goodwill near Anderson Mill on 183.