This is a little more “Jackson Pollack on a Bad Day” and a little less “Medical Catastrophe.” Not no medical catastrophe, just less. The poor thing still doesn’t have a face, and that’s sad. 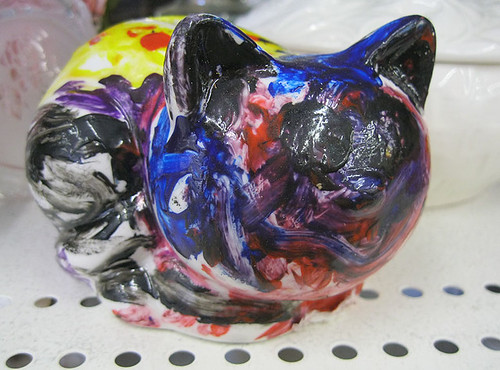 …and yet, I can’t shake the feeling that it’s staring at me. I know, it’s absurd, it has all the perceptive powers of a plate of spaghetti and most of the facial details of same. Still. The dark blue blob in the center of its head region seems to indicate a sort of general direction for staring.

The rest of the poor thing is basically, swirling chaos. With the dark splat face-center, it’s kind of a kittenish version of the planet Jupiter. Much, much, smaller of course. 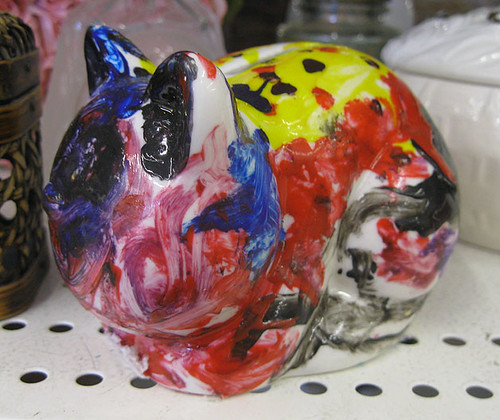 Or maybe some sort of weird beetle, like a potato beetle, but, again, catlike. If cats had chitin–not kitten, which, presumably, they do have, but exoskeletons–maybe they could be this bright and colorful. The artist clearly has a “sunburst after the storm” lietmotif. It’s rare that such a harmonious contrast of winter and spring can be found on a cheap ceramic cat. My compliments, great artist. I look forward to your upcoming project, “off-kilter dalmation (without spots).”