Protip: never put anything involving personal hygiene into any container what looks like a dog. Just don’t. No-one ever says “As fresh as a dog,” or “tidy, like the order Canidae.” Because they’re drooley, messy, and smell, well, like dogs.

But if you do, be a dear and give the poor creature its head. 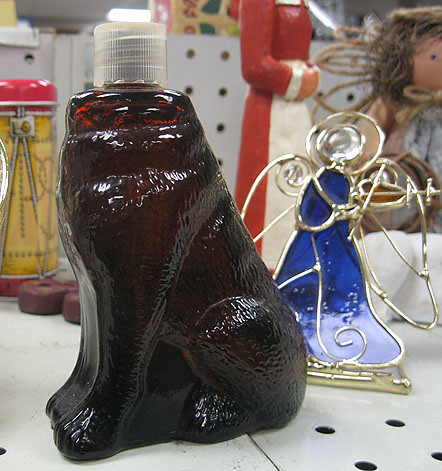 Looking at the bottle, I’m thinking “hand soap.” For some reason, there’s been a rash of headless bottles that once were topped by push/dispense spigots, and for some reason people lose their spigots, and then, for some other reason they donate, like, headless frogs to Goodwill, “maybe this will remind someone of their beloved pet, who didn’t have a head,” sort of thing. I still haven’t figured out why Goodwill keeps trying to sell them. Maybe it’s a part of their 401(c)3 status. Or a curse they picked up when they stiffed an ancient retailer that was either Satan, Death, St. Peter, or Jesus (depending on your mythology.) 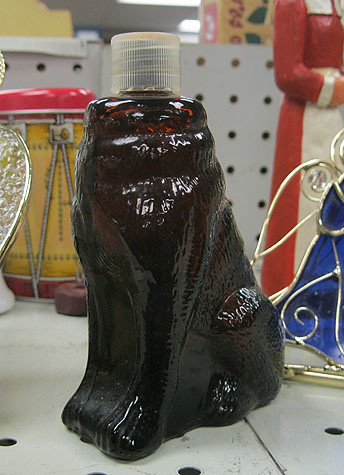 “You dare take the pricetag off an item and bring it to the front counter, and ask how much it costs? Now you shall stay behind this very counter until you sell a decapitated dog bottle!”

Which is pretty harsh. I hope he at least took a few years of purgatory off their sentence, because dealing with the mess those kids made in the toy section has got to be kind of like pushing a boulder up hill forever.

He looks a lot like my brother’s dog, though. And really reminds me why the court won’t let my brother have pets.