This bottle was, sadly, empty. This saddens me, I really want to know what you put in a bottle shaped like a football player. It’s not big enough for a refreshing sports beverage. Given the size, I think we’re only left with perfume or cologne.

But why would you want to smell like a football player? 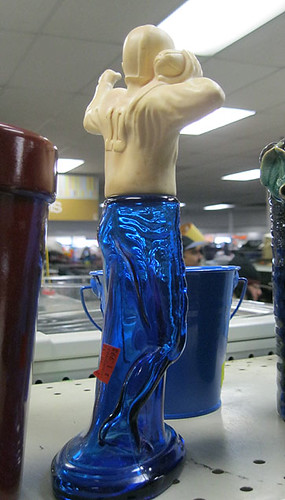 On that note, how many football players have transparent blue glass legs? Maybe all of them, I don’t watch a lot of football. They’d probably have transparent glass legs in their team colors, of course. A tackle or a six-player scrum would be an amazing, bloody disaster, shards of glass legs everywhere, football players dragging their torso and fragmented across the 50-yard line, trying to hold onto the blood-slick ball with their free arm, beating away the other shattered players away like the “surprise, not dead yet!” zombie in the final “flight or fight” scene of a George Romero tribute film…

I might have to get ESPN, that sounds kind of awesome, actually. 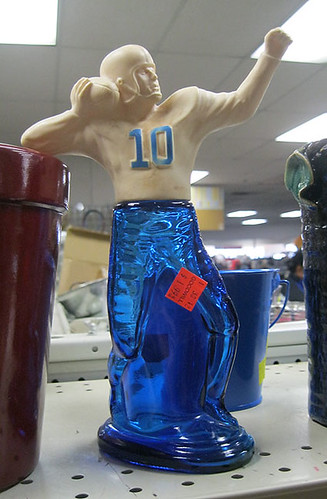 This was obviously the “before” shot. Presumably football players in this alternate universe are single-use only, and need something to remind them of their former, silicate glory.

Goodwill on 183 near Anderson Mill