Dare you sit on the FOOTSTOOL OF MADNESS??

From strange aeons past, ancient, terrible and alien interior decorators descended from the unfathomable depths of space to repaint the furniture. I’m afraid to sit on this. I’m afraid that it will shatter my butt’s fragile sanity. Plus, I’ve never really wanted that many tentacles that close to my posterior. 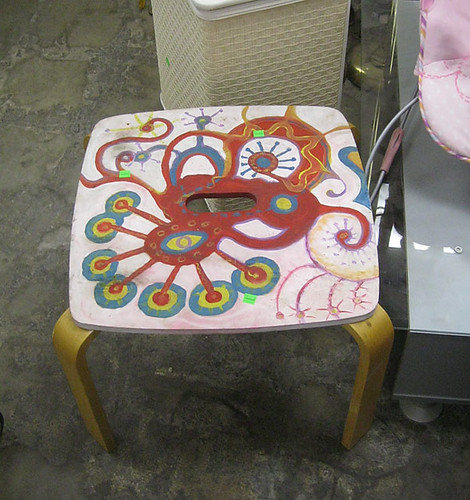 And I think it might be screaming. It doesn’t seem healthy to sit on something that’s both screaming and staring at you. Though if its screams abruptly stopped when you sat down, that would be worth the price of admission.

Sometimes the employees would come in and unlock the door, and it would be on the far side of the shop. Which, yeah, so what? It’s a thrift store, if something’s in the same place at night that it began the day in, it’s probably broken, or one of those horrible bottles of dead veggies in oil. But they found it in the toy section, surrounded by decapitated barbies. I think they were going to take it to the Goodwill Outlet store, where it might cause less financial harm. 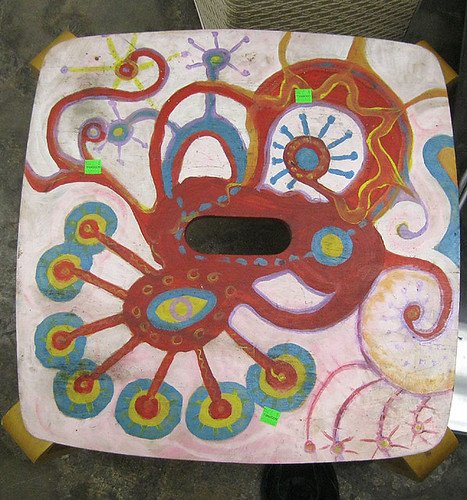 Horrible seven-legged space-baby says AAAAAAAAAAAAAAA…..I don’t blame it. Someone seems to be going after the poor thing with some sort of spiked flail, one of its eyes is being held open Clockwork Orange style, and then there’s the tattoo of the glowing eye ofÂ Uumellmahaye. Clearly, it is no fun being a seven-legged space baby.

Goodwill on 183 and Anderson Mill, Austin