There’s a fine line between innocence and exploitation. When it comes to Dollar General ceramics, the line gets trampled on by a herd of cattle.

I really don’t want to offer up any commentary about these for fear of seeming like a creepy sleezeball. But what the hey, I’ve already got the bowl of free candy, let’s see how far we can take this. 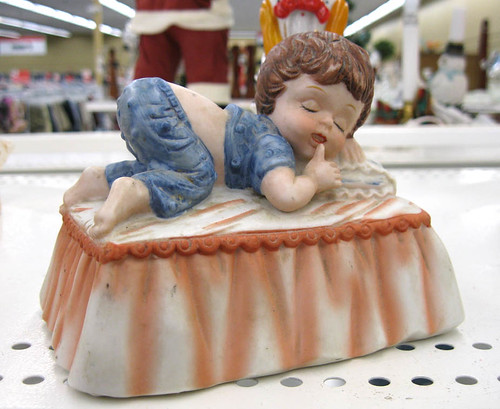 It’s like…it’s like he’s on a serving tray. This is the small, innocent vulnerable waifÂ equivalentÂ ofÂ nigiri-zushi, offered up on a soft, airbrushed bed of angel food cake for all yourÂ shota Â complex needs. Take two, they’re small.

As for this next one, I thought I saw that same strange expression on the countergirl atÂ La Zona Smutt, but it turned out I had spent ten minutes trying to pay the inflatable mannequin. Boy, was my face red. No wonder I didn’t get any change. 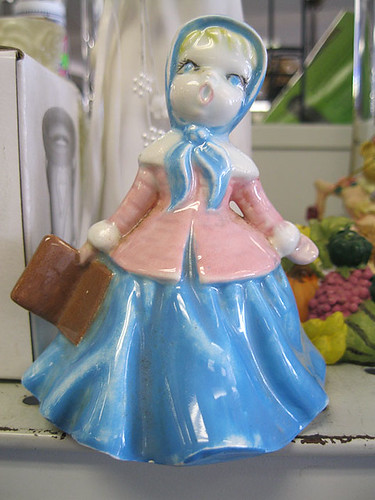 Though the huge, vaguelyÂ malevolentÂ angry blue eyes of DOOM is something I haven’t seen before on adult novelty items. She looksÂ pissed. Must have gotten to that part where J. K. Rowling offed Dumbledore. 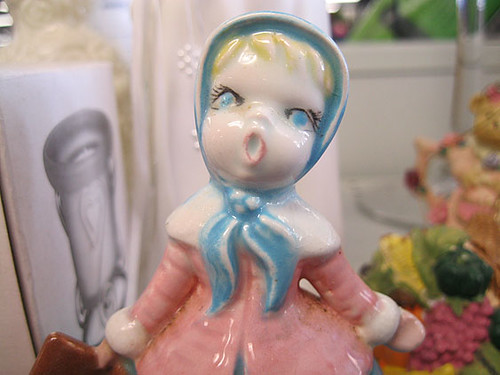 Do not mess with me, or I WILL devour your soul. The last thing you hear will be a horrid slurping sound.

Embarrassing little boy Savers on South Lamar; choirgirl statuette from Goodwill near Goodwill Computers on 290 and I35, Austin.