Florida: Malformed egg-demon to the world

Florida: Yes, it’s the Sunshine State. But did you also know it was the Soft-Boiled Egg state? It’s true. Tens of thousands of slightly-congealed eggs are shipped to Florida from neighboring, egg-producing Alabama, where the state bird is the Short-Crested Leghorn. A well-fed Leghorn can lay up to eight eggs per day…andÂ they’re already soft-boiled. 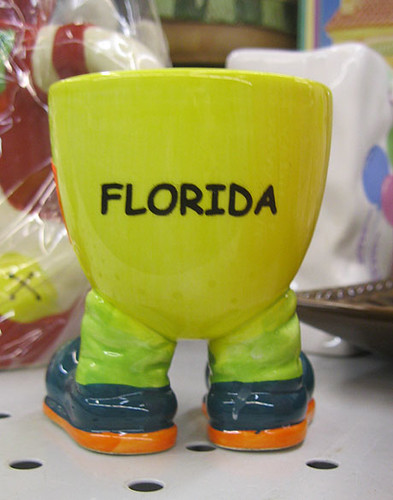 You were nothing in Florida if you didn’t have aÂ diligentÂ and well-paid dwarf to serve you your eggs in the state’s official soft-boiled egg costume. The life-sized version didn’t have the word “Florida” on the back. It had the word “Eggs,” with the “G”s cleverly placed for maximum dignity.

Dignity: not a concern. 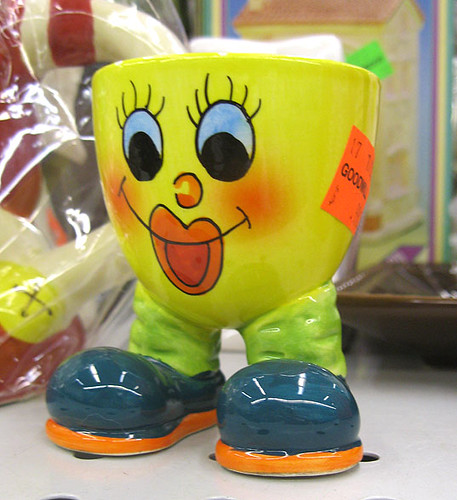 We cannot even begin to list the things wrong with this image. But we will begin with two. Firstly, the act of eating a soft-boiled egg is, frankly,Â barbaric, if you have a soft spot for eggs. You knock the poor thing’s top off, stir salt in frantically, then scoop out the delectables with a tiny spoon. Do you really want to anthropomorphize the experience? No, you do not. If you beginÂ feeling for the egg, you’ll never be able to enjoy breakfast. You might as well be concerned with the dwarf, and then where does that land you? You’dÂ starve.

Secondly: I just don’t think that’s the right place for a mouth. It makes me feel uncomfortable, even a little fearful, and have associations with a soft-boiled egg that I’m not at this stage in my life ready for. Egg cup, I beseech you, do not have lips.