Fast cocoa and other filler

It’s filler Friday again, and that means…NASCoco! And a particularly ugly painting that really should have gone out with the one-stream recycling, which now takes Mixed Media. But for now, the fastest cocoa evar. 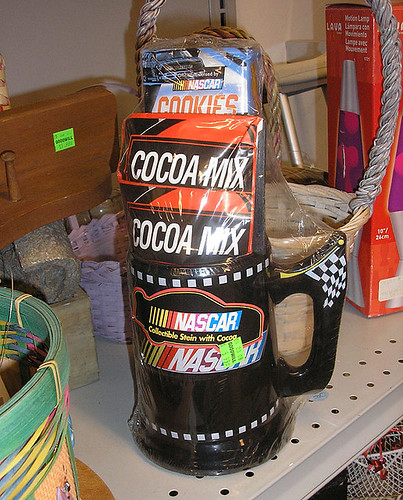 What we have here is one of the weirder juxtapositions I’ve seen–homey winter comfort beverage, apparently dunkable cookies, and high-speed crash-prone racing. There is something here that clashes, just a bit. It’d be like NASCAR-brand ladyfingers, or the new line of base jumping long underwear. Which has probably been done, and I really shouldn’t be surprised about anybody slapping a brand on ANYTHING ever since Schreck’s “Donkey” started advertising my blood pressure medicine.

Even so, there’s something here that clashes. I don’t think NASCAR drivers even DRINK hot beverages. The odds of a spill at over 150 MPH would be rather high, and the results would be impressive.

“Oh, Dave Blaney’s window’s covered in a thin layer of brown again! Just like last year’s spectacular roobios incident, but with more–Hey, Bob, would you say those are marshmallows?”

“Definately marshmallows, Pete. Quite a lot of them. I’m guessing he takes his cocoa with extra marshmallows.”

“That would go well with his new ‘Nestle Marshmallow Madness’ sponsor decals wouldn’t it? I’m a little surprised he dropped Monster Energy Drink for cocoa.”

Then there’s this mess. 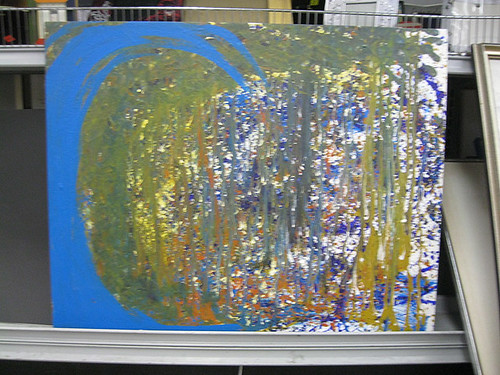 Terrible photo. I think my camera couldn’t focus on it. There’s a certain Jackson Pollock-like intensity to this work but none of, and I say this entirely non-ironically, but with none of Jackson Pollock’s usual restraint. Or color choice, because absolutely NOTHING goes with Lentil Green except pieces of ham and a church potluck.

On the one hand, I can definitely see why this was donated to Goodwill. On the other hand, I’m baffled as to why it was put on the shelf. It makes Spin-Art look kind of classy.

Nascoco from…you know, I don’t remember, it’s been four years! Probably the now-defunct Goodwill on Manchaca and Stassney. Splat-art from Goodwill on 2222 and Lamar, Austin.