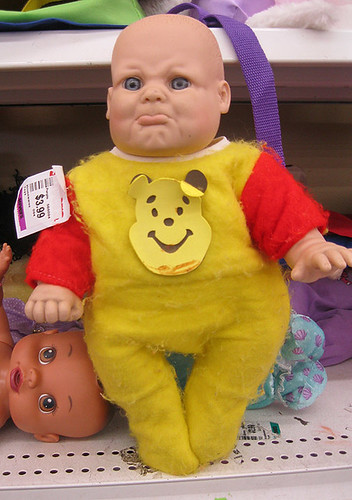 Because lord knows, babies hate to miss “pooh week.” They’re really all about pooh. He’s even wearing the team colors. 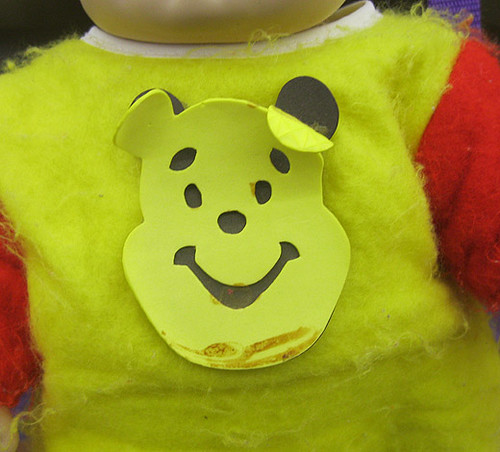 This assumes the team colors are jarring red, cheerful yellow, and “gently used spaghetti-os” brown, and that Pooh would have some of that action leaking down his chin. I’m willing to make this assumption, though, because the poor little guy’s obviously having a bad day. I’m not sure if I meant the baby or Pooh, though. The baby doesn’t seem to be having a bad day, he’s clearly crushed his enemies under his mighty, flannel-wrapped bottom, and that MUST make anyone’s day a little better. Perhaps that’s a scowl of rage, determination, and triumph. It only looks like gas. 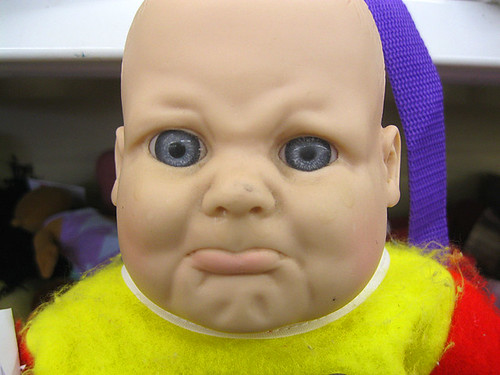 All babies look a little like Winston Churchill. This one looks like Winston Churchill just ate a caterpillar, and then learned that he was severely allergic to lepidoptera in all their many and splendid forms, and had about three hours left to live. And badly needed a diaper change. Do I waste ten precious, precious minutes on clean nappies? Or do I give that impassioned and history-changing speech at Parliament? These are the times that try baby’s souls.

Â Goodwill on Parmer and I35, Austin

3 Responses to “He’s probably upset because he missed “pooh week.””