Probably not safe for work somehow.

Now there’s a man with plans for his barbeque pit. I imagine the tail is prime grilling material. Just add some cajun spices, turn over medium heat after five minutes, serves four. Or serves one, if they really like beaver. 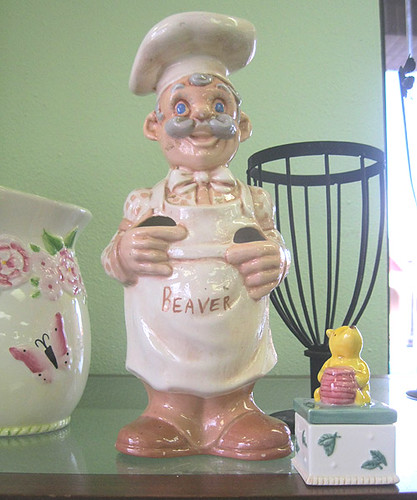 Winnie the Pooh, however, disapproves. In fact, he came all the way over from Pooh Week just to turn his nose up at the whole illicit beaver-poaching trade. Some of his best friends in the 100 acre words are beavers. Or were they voles? Some sort of rat anyway.

The holes in his chest are also for beavers. They burrow close to him for warmth, only their disturbing beaver teeth peeking out, in all their horrid glory.

I’m not liking that man’s expression. He’s really too excited about the whole “beaver” concept. For most people, it’d take two or three tabs of Ecstasy to get that worked up about a river rodent. I mean, points for enthusiasm, but you’re frightening the neighbors, sir. I guess it’s for the best that he left the costume at home.

Actually, this is mostly an excuse to mention a “new” thrift venue in north Austin, a little bit south of Anderson Mill–Nifty Thrift, at 12636 Research blvd, right next to the Mongolian Barbeque. A nice little selection with good prices, stop by the next time you’re in extreme northwest :) Someone give the poor old beaver guy a home, he’s probably still there…

One Response to “Probably not safe for work somehow.”