Now how much would you pay?

Would you pay $20 for a set of small intestines cleverly woven into a very small clown? Yes, please! 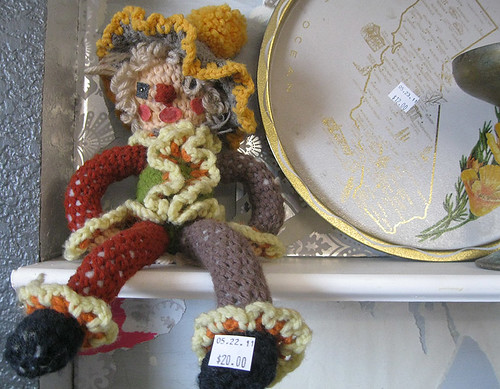 I really wanted to post this to crow about a completely awesome new crapeterium that opened on Lamar and Manchacha, what a magical wonderland of crazy stuff it was, just next door to Far Out Furnishings. I did. It was a cottage crammed full of peculiarities, including this little guy here, who obviously reigned supreme over everything he saw. I would recommend that you drop everything, including your job if need be, to run down there, but they closed. So you could go there and beat on the windows, howl at the dusty piles of amazement that are still inside, just out of reach. But I wouldn’t recommend it, because they are ever so quick with a restraining order. 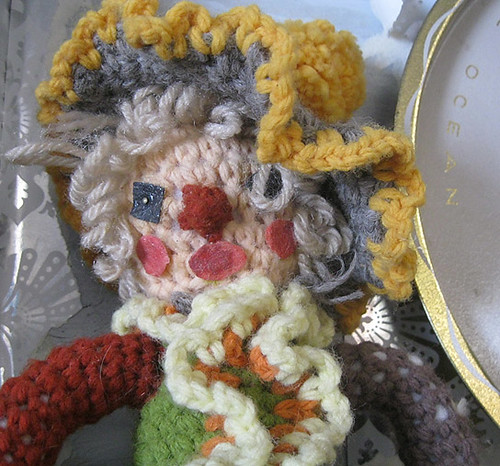 You’ve heard the old saw, “laughing on the outside, crying on the inside?” This is kind of like that, but no-one’s laughing, and his insides seem to be on the outside, so he’s kind of crying and laughing at the same time, only he’s screaming. Which is a response that I endorse. I’m not sure what he’s wearing on his head, though. Possibly a cheerful yellow squid. I don’t know.

Someone’s grandmother probably made this for her grandson or granddaughter, with her own, loving hands. And maybe the child said “thank you,” or maybe started to cry, until Mom made him or her say “thank you,” but in that terrified voice that says “please save me” in addition to whatever the words might actually express. And dad, dad said, “Yes. It is a good thing that she is in the home, and they lock the door and keep her inside when we leave. Worth…every…penny.”

Brought to you by the tragedy of Far Out, formerly of Manchacha and Lamar :(

One Response to “Now how much would you pay?”