The Day it Snowed Blood and other merriment (NSFW)

The Christmas it snowed blood, oh, what a year that was. Grandfather would often tell us stories about those long-ago blood-christmasses, how the world was covered in a thick carpet of red gore, and when the moon shown on it just right, late at night, it was kinda…kinda horrible. We thought those special Christmasses were long long past, possibly entirely fictitious, until we got our own bloodfall. 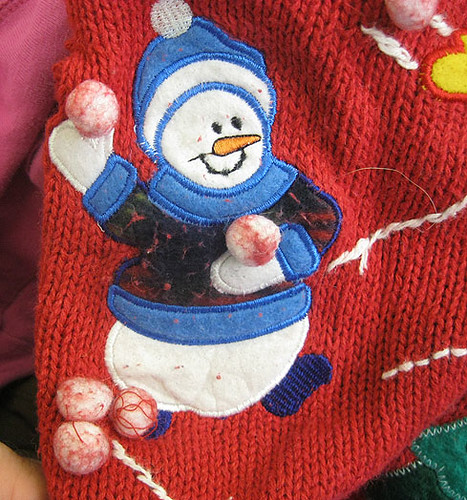 What fun we had, throwing bloodballs at each other, the sound of children laughing, or screaming, it’s hard to tell sometimes. But I’m sure they enjoyed it, except for ma, who had to wash the clots off our warm winter clothes. 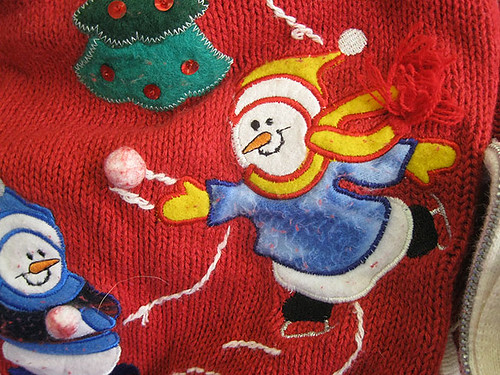 Nobody’d ask where the blood came from. Grandpa would always say something kinda vague, like “looks like the angels are playing hockey!” or “We said that’s what happened when Santa made a reindeer roast for Christmas Dinner,” or “when can I get out of this place and go home?” Some of us tried to skate on Newfield Pond, but that was doomed from the beginning. Kind of like trying to slide through a frozen pudding. You really didn’t want to try a double-axle, you’d get a face full of something pretty nasty. 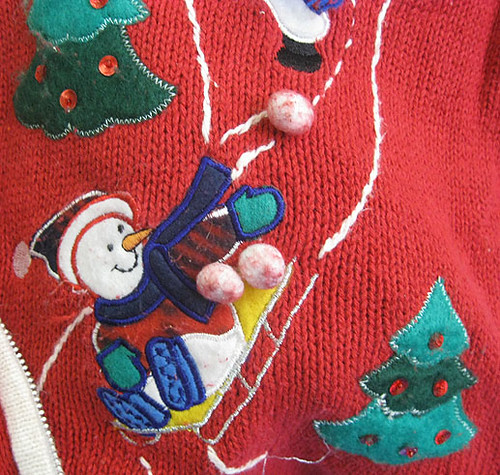 So we contented ourselves with playing silly blood games, decorating the christmas tree with sparkling clumps of gore, you know, what everyone would do on a magical day like this. 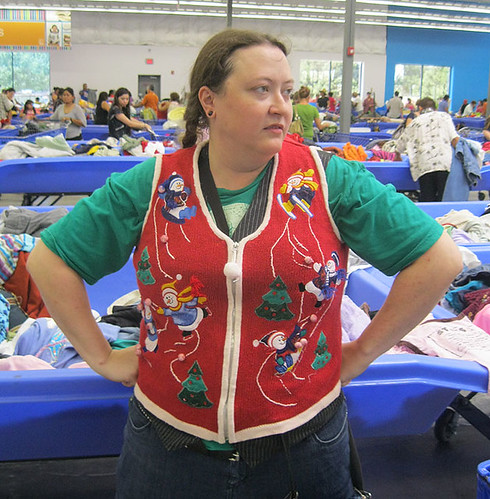 I think someone may have skinned my 3rd Grade teacher to get this sweater. There must be a special catalog they all shop from.

This next guy isn’t really a horror, per se, but he is awfully stupid. And very, very excitable.

Apparently, this was a candle holder of some kind? Which is a little terrifying. Kind of like a festive Yuletide “Wicker Man,” or some nightmarish way to torture a reindeer that managed to fuck up one Christmas too many…”Oh god, it burns, just…kill me, Santa…” (Arms flail wildly, maybe a little festively)

Something from the “minimal effort Christmas” family, I think. If it’s the thought that counts, maybe someone should think a little harder. 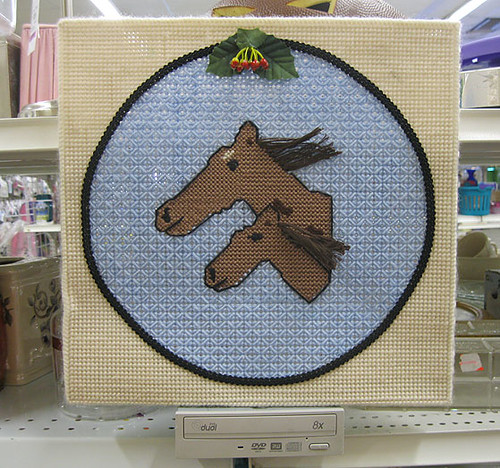 I assume this is Christmas, it’s got a sprig of holly on it. I also assume these are horses, because tube socks don’t have ears and a mane. 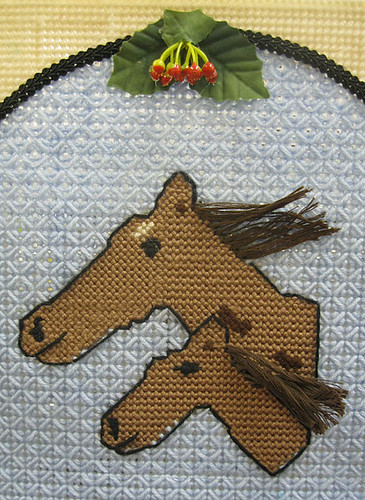 If my sister had ever said, “I want a pony for Christmas,” this is probably what she would have gotten. Or else something that Mrs. Corleone might have embroidered for Jack Woltz as an extremely creepy Hanukkah gift in the Godfather Christmas special, the one where Vito Corleone is visited by, like, eight ghosts and learns the true meaning of Christmas. “I’m going to stitch you an ornament you can’t refuse” sort of thing. We’d watch that one every year when I was a kid.

I think this guy escaped from the little-known Rankin/Bass Christmas Special, “Jack Frost Vs. the Angry Snow Gods.” A lot of the dynamic duo’s later work just didn’t make any sense at all, I didn’t think it could get weirder than “The Life & Adventures of Santa Claus.” (or Thundercats. Did anybody else know that? I didn’t know that.) But, no, things can always get weirder in RankinBassland. 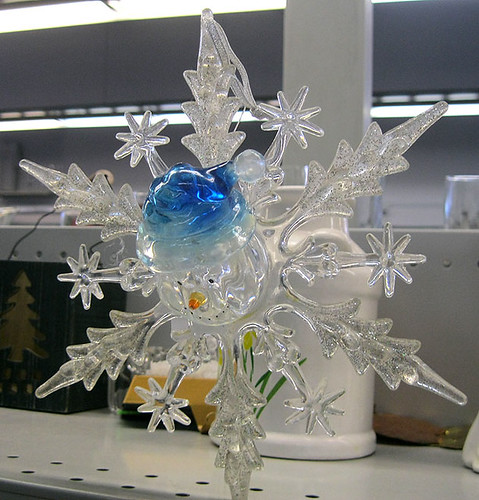 Tremble before the Snowflake King and his 5.7 million subjects!! 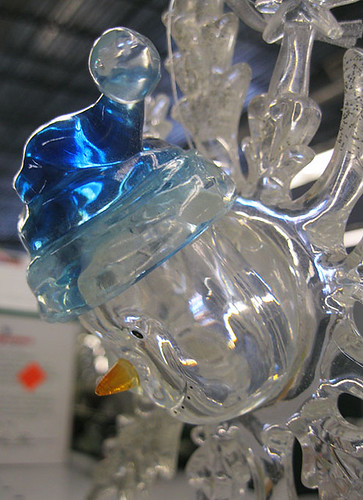 Honestly, I don’t think I would have been quite so cavalier about snowball fights if I’d known that the snowflakes had little tiny faces, and probably little tiny hopes and dreams (very tiny ones that melted at 33Â° f, but still, dreams nonetheless.) Thankfully, we only have snow in Austin, Texas one year in seven. I don’t know how people in Minnesota live with themselves. So much blood on their hands. Particularly during those three-foot-high bloodfalls I’ve seen sweatervests about.

This one was from another little-known Christmas special, they’d only run it past 10:30 so. I never got to see it when I was growing up. Now that it’s been released on The Warner Archives, I’m not sure what all the fuss was about. 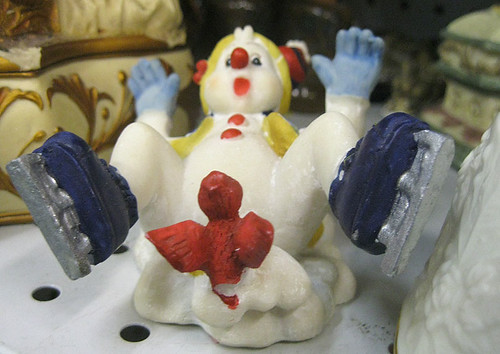 “Mad Monster Party” was a lot worse. Seriously, Phyllis Diller vamping it up will leave scars that Frosty showing us his snow face never would. 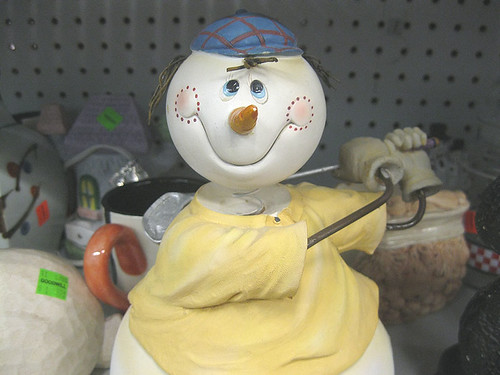 Now, Frosty would like you to put his sordid past behind him, and just have a merry Christmas, okay? Forget all about his “Blue Christmas” special and move the hell on.

Or he’ll club this poodle. 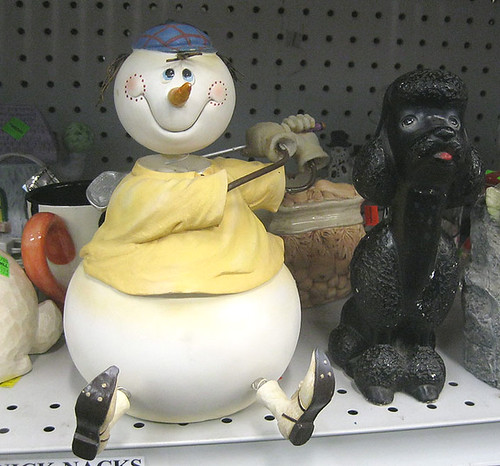