Plum Pudding Man and Other Treats

Pity the man made entirely of fruitcake. Is it the bigger tragedy that he might be eaten, or that no-one will eat him? 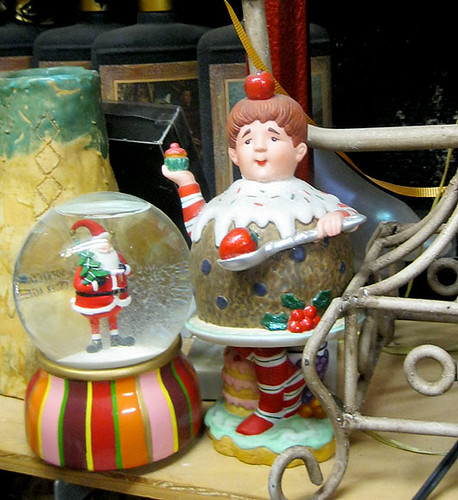 I wonder if there’s a series of these, little dudes dressed up like all the major Christmas treats. Like Ciderman (a bit like the Kool-Aid Man, though instead of bursting through your wall and yelling “OH YEAH!!!” he knocks politely at the front door, then sings anachronistic songs about wanting a drink, and figgy pudding. Though, as we’ve established, no-one wants figgy pudding.) Or maybe there’s Mince Pie Guy, though the thought of that makes me a little ill. Mince Pie Guy and Fruitcake Man don’t sound like the most masculine pair. On the other hand, with those tights, we’re really not out to prove anything to the world at large.

Is this what happened after William Tell’s son and the thing with shooting an arrow off his head? Like it became some sort of strange fetish, where he wore ever more outlandish costumes, balanced fruit on his head, and demanded to be almost shot? I’d better ask Dan Savage, he’d know.

So, if you’re anything like me, you’ve probably stayed up at night for hours, wondering what would happen if Santa Claus and Rasputin, the Mad Monk of Russia, had a child. Maybe you’ve even written fanfic about it. Or maybe I’ve said too much. Anyway, wonder no longer–if, indeed, you were wondering. 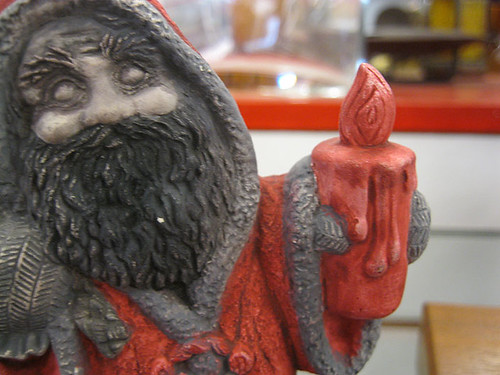 I like the blood-wax candle with the red flame. Just in case the blind, dead eyes weren’t creepy enough. 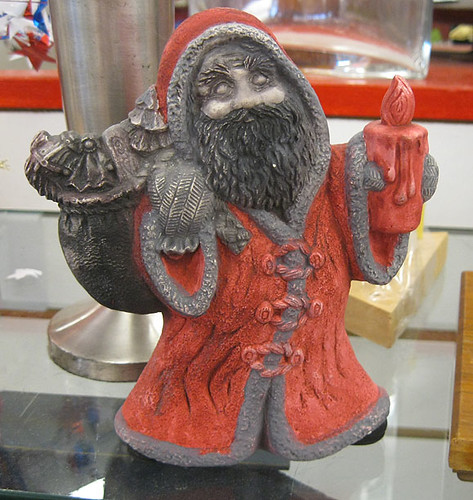 Okay, not only is this particular Santa clearly a Russian zombie, he’s also wearing a robe made of meat, and the totally achromatic bundle of gifts on his back suggest that, besides eating kids’ brains, he’s going to take all the color out of Happytown. I can’t get behind this Santa. Though that would probably be better than being in FRONT of this Santa.

Another one from the “Kids…we’re not going to sit on Santa’s lap this year” files, comes Santa the Strung-Out Folk Singer. No child I have the smallest amount of authority over will sit on this Santa’s lap. 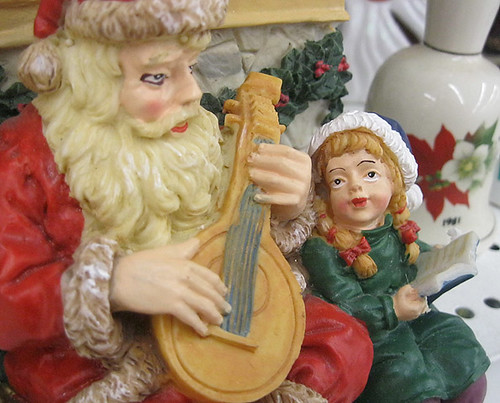 Many of you might not have been aware that, among Santa’s many skills, he’s a talented mandolin player. You probably don’t want to know what he uses those skills for. Kids today, so innocent, so eager to fall under the sway of a folk musician. 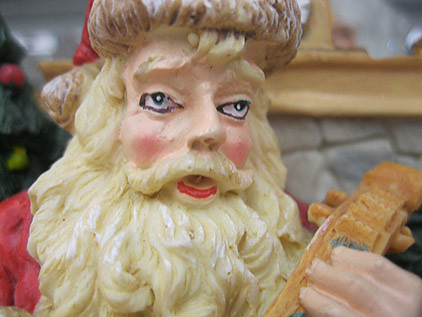 That…that is one strung out Santa.  You can almost hear him singing. “Look out little Nestor, you’ve got ears that reach the ground…” I don’t know what Santa’s been taking. Probably the same stuff all those elves are on.

On the count of three, scream it…one, two, SANTAAAAAAAA! 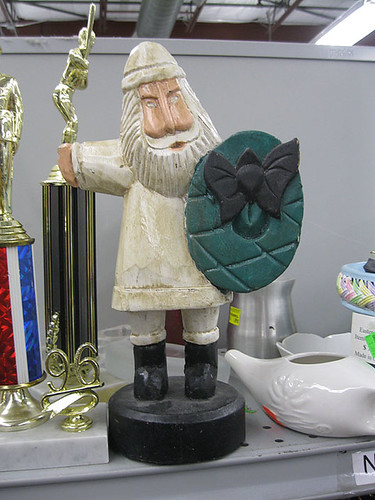 Enough of that singie happy hippy folk music BS, this Santa is out to kick some naughty ass and bring a world of hurt to ANYONE who doesn’t believe in him. Maybe you missed the part of “Santa Claus is Coming to Town” where Santa tears off his shirt and beats a few heads with his wreath shield. It’s in there somewhere. Right after “He’s making a list and checking it twice, laying out hurt for the kids who aren’t nice.”

Still with the creepy eyes, though. Santa really needs to get to an ophthalmologist.

…You know, you’d think she would have learned. 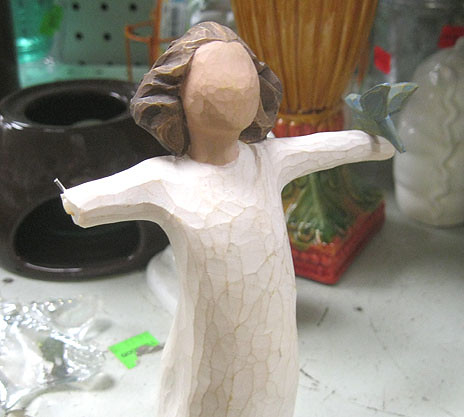 Really, after the grackles took her LAST hand, she’d be a little less trusting, but no, you can’t teach an angel anything. 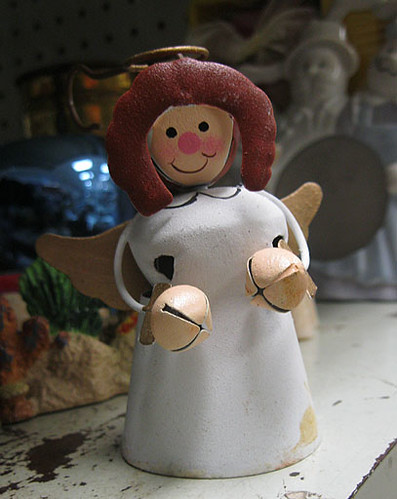 Unless, of course, you’re trying to teach an angel how to lay someone flat with a roundhouse punch, like “The Million Dollar Angel.” That, they’re all about learning. Angels will seriously mess you up in a fight. Don’t let the jingling fool you, those fists are full of pain. And jingles. 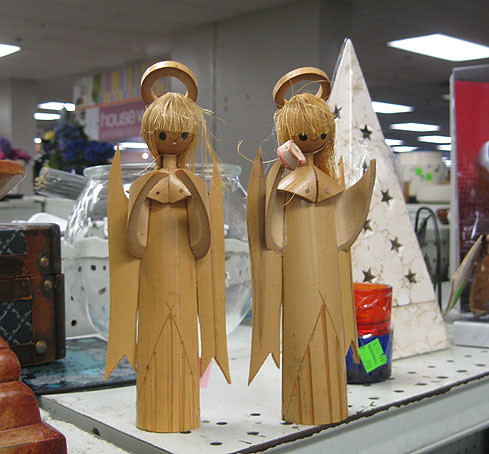 I have this strange feeling that these two angels are going to start invoking Mothra, like, any second now. It happens all the time. 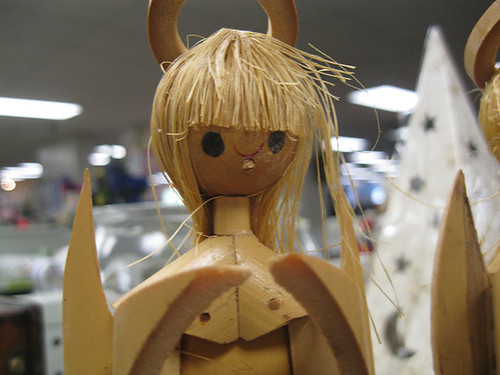 The sound effect, which you can’t hear, is something like “pbfblfbth.” Or, possibly, the Mothra song. I don’t know. 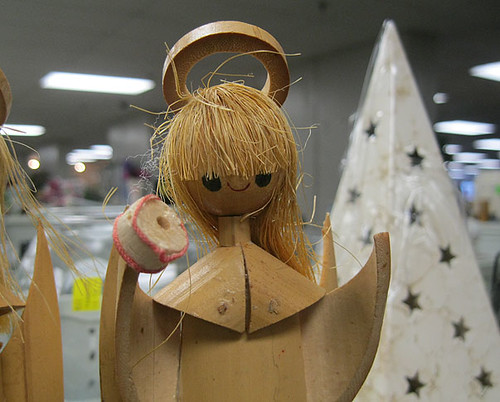 And this poor girl appears to be endlessly beating her hand against a small cake. Apparently, both of them were deeply traumatized by having straw hair, but the more strong-willed of the two, and sought to fill the hole inside her with a small wooden spool. I’m glad she’s happy. We should all be so lucky.

Aaand then back to horrible, staring Santa. Oh Santa of beatings yet to come, I fear you most of all. 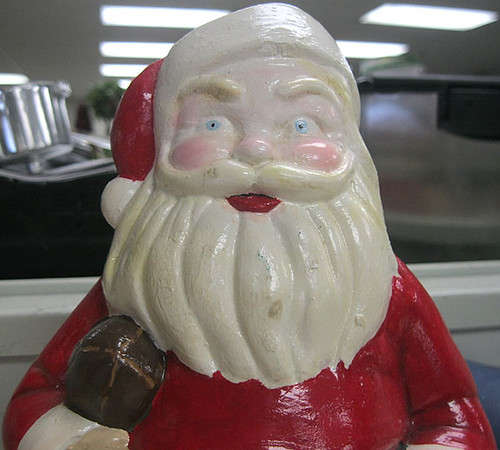 Is that a sap? Seriously, is it? Either he’s got a leather club or a turkey drumstick. And given the stitchmarks, I’m guessing the former.

Thump. “Another one into the sack for Santa! Ho ho ho!” 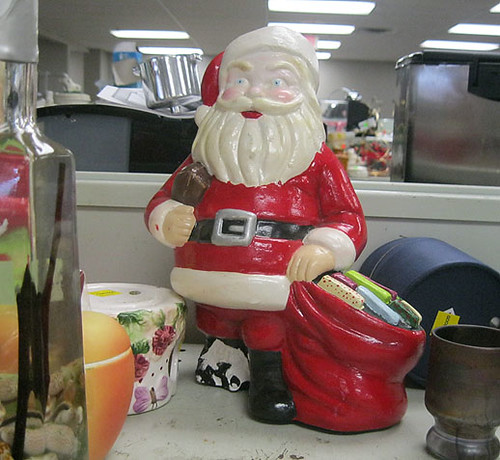 It’s a Dadaist Christmas–Santa shuffles around with only half a foot, menacing children with a club. The nice ones get to escape. The naughty ones…into the sack. The kind of so-so inbetween ones, they get individually-wrapped rectangular prisms, and go to sleep kind of relieved, kind of puzzled. Then there’s a musical number involving dancing representations of Quaternion numbers and hope.