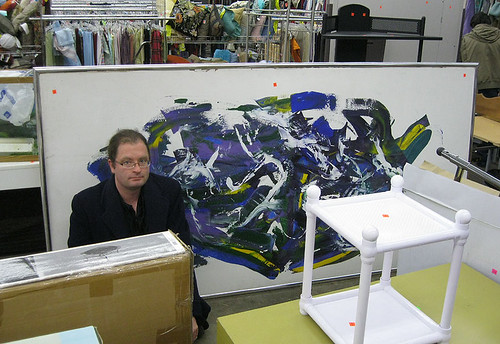 I wanted to express the sheer vastness of this piece. If you’re going to throw a combination of mustard, blue tempera paint, and bird droppings at a canvas in an attempt to express some emotion that really would take a 16-syllable German word to get across, you really need to aim big.

I only regret that my shoulder is blocking out such a big portion of the image. Trust me, I thought of sitting about six inches to the left, the entire thing would have made sense. It would sing. Because there was a swirl of dirty yellow with a bit of teal behind me that totally held the entire thing together.

In the all-Goodwill remake of “2001”, this is what the monkeys find. And that version is I think a vast improvement because the human race develops the 99-cent sale before it discovers simple machines–and really, why invent the lever to kill a gazelle when you could just do it with really, really bad artwork?–but more importantly, it’s 45 minutes shorter.

So, if you ever want to pick up something that takes up too much space, is in terrible taste, is cheap, and screams “god, what was I thinking?”, you can find me on the floor of Goodwill.