Would you trust this priest? 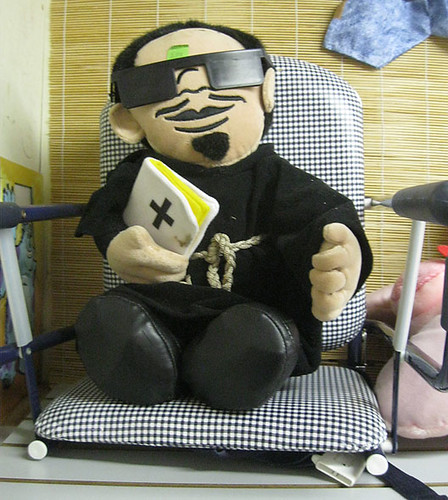 So I thought to myself, “how can I best make fun of a cuddly stuffed priest?” Would I talk about his special “cliff’s notes” bible, which only has the four important pages? I’m pretty sure you could get the high points in four pages with big felt letters. Ten commandments, check. Garden of Eden, check. Probably want to include the Christmas story and Crucifixion in there, just for funsies. That’s really all you need.

Or maybe I’d go on a bit about the demonstrable need for a cuddly stuffed priest. I’m not sure how to do it in the tasteful, sensitive manner that Thrifthorror builds its name on. I’m pretty sure the conversation between parent and child would go something like “Really, they’re not that scary, are they? Look, he’s smiling. He likes you. He’s sitting in your chair, do you want to sit on his lap?”

I thought, “this guy’s kind of creeping me out.” He’s got the whole “Blues Brothers” thing down, very much “on a mission from God.” But I never thought the Blues Brothers were avuncular. If you happened to be Mrs. Blues’s son or daughter, you might have a different opinion. But big heavy sunglasses and a pointy goatee do not help in the “friendliness” department. I feel like he’s going to try to sell me a used god. I’m not up to that.

But ultimately, none of this is what freaked me out about this guy. 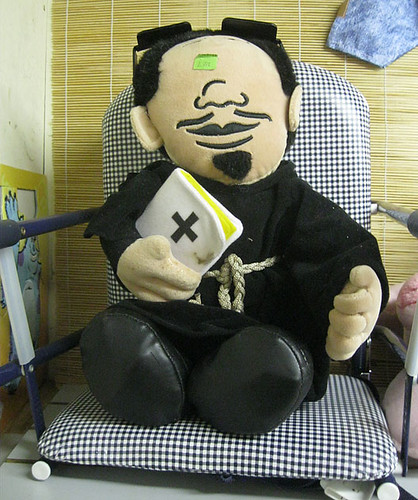 Where’s his eyes? Where’s his EYES?!? What kind of strange, post-Lovecraftian seminary spits these creatures out? Are they aliens masquerading as priests? What do they want? Did they come for our eyes?