Another tragic teleportation accident. Hermione never had this problem. But then, Hermione was never carved out of scrap cedar by a special-needs woodchuck. Unless they go into that on “Pottermore.” J.K. Rowling is full of surprises. 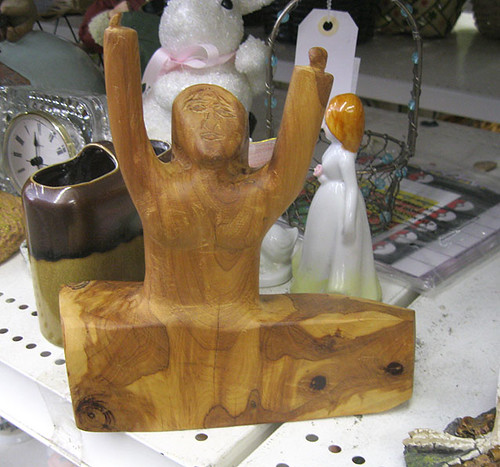 Okay, I’ll grant, there are two little rings that do give the impression of legs, but beyond that, no, not seeing it. Michaelangelo never said “Cut away everything that doesn’t look like a flat-headed loafman leaping out of a tiny, infant-sized coffin.”

And while we’re on the great masters of art, that smile is totally, every bit as mysterious as the Mona Lisa’s. “I kissed a jar of Marmite,” it says, “and now I’m having second thoughts. Would you like to share this experience with me?”

Meanwhile, six inches to the right, death is no escape from indignity.

“In life, I bought only cheap dog food, no matter how much my schnauzer, ‘Wuffles,’ protested. In death, they have forced me to sit in a pile of kibble, and changed my pelvis into a doggie bowl. The gods are darkly ironic, and maybe a little weird.”