Sometimes, they say, if you listen real close, you can still hear them being marked down.

But no story is told with the same amount of shiver, the same don’t-look-over-your-shoulder dread, as the story of the weeping scarecrow of Aisle 13. 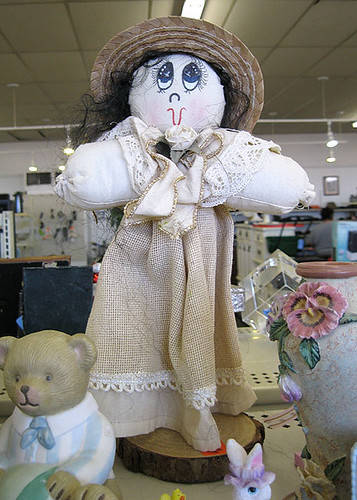 Do what the bear does.Â  Keep your head down, find something else to do, move slowly away, and if at all possible, avoid eye contact.

I’m not sure if she’s a doll, a decoration, or a public service announcement promoting compassion for paraplegics. I’m leaning toward the latter. She’s got that “brother can you spare an arm?” look that I haven’t seen since the ill-fated multiple-amputee walkathon. Which, admittedly, seemed like a pretty good idea on paper, but the hilly San Francisco district was not the best choice, and these things are all about location.

I really want to talk to the artist about “artistic vision.” Why the tear-filled, sorrowful expression? Is she pining for the hug, the words, the nursery magic that would one day make her into a real frizzy-haired, moon-faced, ham-armed tragedy? Because if so, this entire project is just ill-thought-out. I don’t know, it just looks like she’s trying to make me feel guilty for something I did. Like I accidentally misplaced her arms and replaced them with sacks of flour. Like she’s accusing the world. The world needs to tell her “no, we didn’t do it, and we don’t know where your arms are. Please go away now.” Take a stand, people!