It’s what’s inside that counts.

We are assuming, here, that what’s inside is tasty, tasty cookies, because if it’s what’s outside that counts, we should send it back to remedial math. 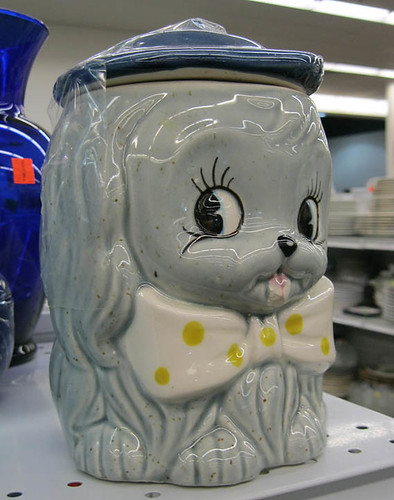 Really, you wouldn’t WANT to store dog biscuits in this jar. The dogs…the dogs would get ideas. Sure, if you had ONE dog, you could get away with it. Unless you took him to the dog park. Then, there’d be that horrible moment…you took your eyes off Rascal, and then the next moment he’s got another dog pinned down, and everybody’s screaming, because he’s trying to find the biscuits. And you wonder, “Where did I go wrong?” but that’s not the first thing you wonder. The first thing was, “Where did he get that scalpel?” 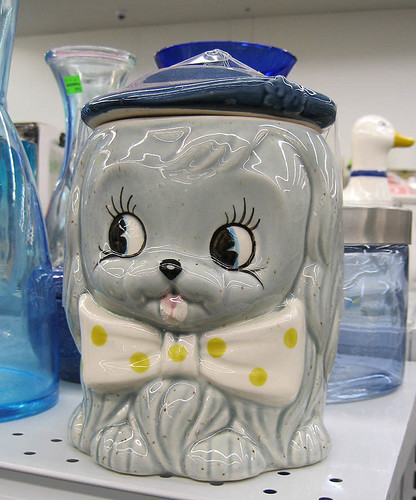 Actually, it looks like this poor guy’s short a few biscuits already. Maybe you should put a few of those back, this is the only dog that’s forgotten how to lick itself. 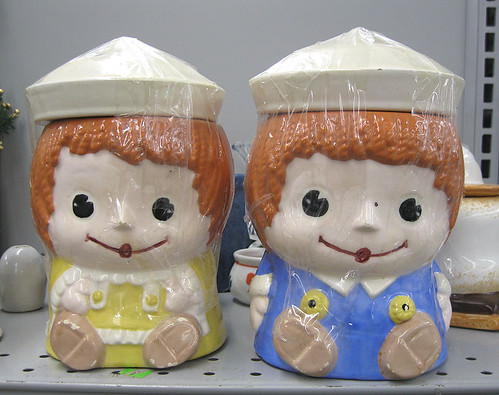 Thank god, they’re shrink-wrapped. Now I won’t worry about them coming for me in the night.

I’m pretty sure the one on the left has two cute little suspendery-strappy things over her shoulders, but I’m not sure what her brother…sister…slightly more massive related entity…has going on with his-her-its chest. Are those yellow things flowers? Valves? Attachment points? A cleverly-concealed weapon? Air gaskets?

I note that she’s holding them in/on/still with her feet. That’s probably for the best, since her arms are tiny and ineffectual. If they broke free, they might put out an eye.

Goodwill at Parmer and I35, Austin