Please stand and say the pledge of allegiance to the shirt. 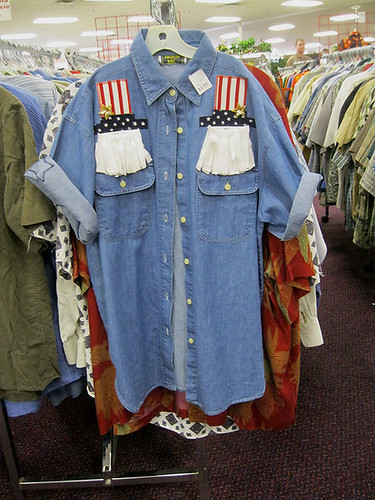 I have to assume this was yanked off some poor teacher. Oh how she must have struggled. “No! NO! It’s educational!” It was probably freaking out the third graders–the way Mrs. Klapham had Uncle Sam staring at them from over each boob, his tangled beard covering her ample breast in a cascade of wool. Setting up weird associations between Americana, Santa Claus, and mammaries that would, later, send many of them to a marriage therapist when their partners refused to wear the “lady liberty” to bed. 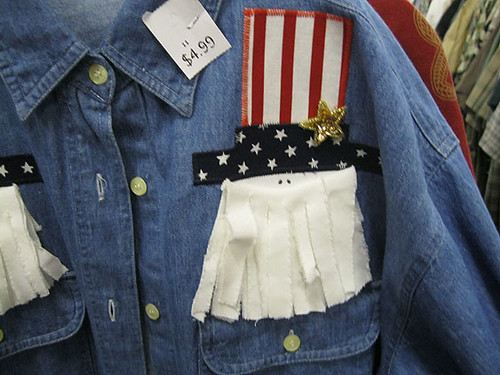 You have to side with the Parent Teacher Association on this one though. Really, there’s such a thing as too much weirdly-placed patriotism. This one was worse than the “Old Glory” sarong.

Not that I’m really a part of that particular subculture, because they never hold late-night, throbbing-techno dances in “Salvation Army,” and if they would I would be there in a heartbeat, but this doesn’t really speak “rave” to me. 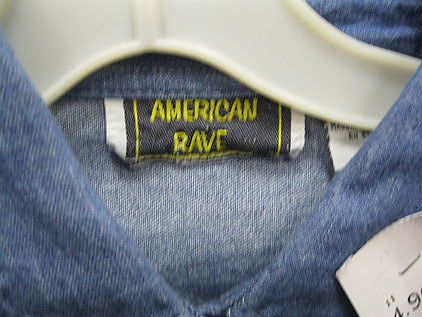 But, there you go. As the raver generation ages and buys minivans, this…THIS is what you get. Dreadful. 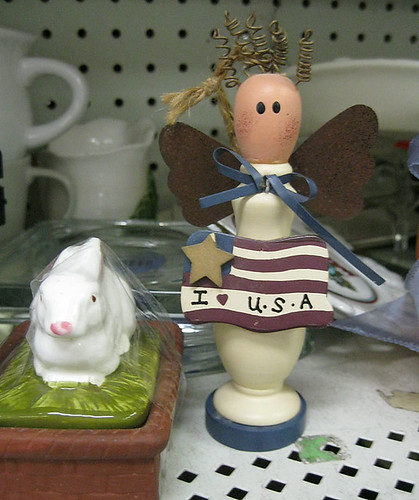 …and bunnies. USA and bunnies. If there was an angel of America, yeah, she’d have that hair. She’d have bag-lady hair, and a D-ring suspension point embedded in her chest, because she’d be totally pro-bondage and anti-conditioner. But she’d have a soft spot for cute, fluffy things. And nice hips, but no feet. Because that would symbolize…something. Probably victory. Or determination. Or shopping. I don’t know, one of those. 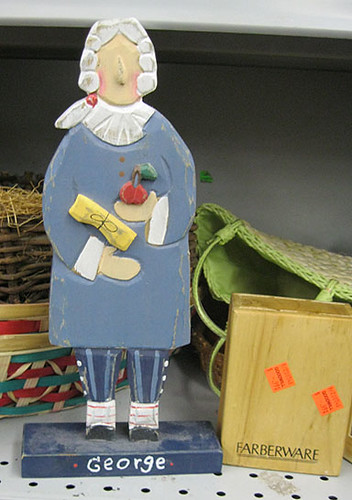 Awesome pants, by the way! I can see you’ve got your entire life wrapped up in this one iconic image. You’re probably holding the Declaration of Independence, there. And an apple, because you discovered gravity. I didn’t know that, but it was on Wikipedia. I’m not sure about the leg-warmers, though they’re a very forward-looking fashion statement, and would have been a great boon when crossing the Patomac. Maybe this is actually BOY George, but I don’t think he’d be caught dead in a dusty blue muumuu. And the make-up’s a little too subdued. 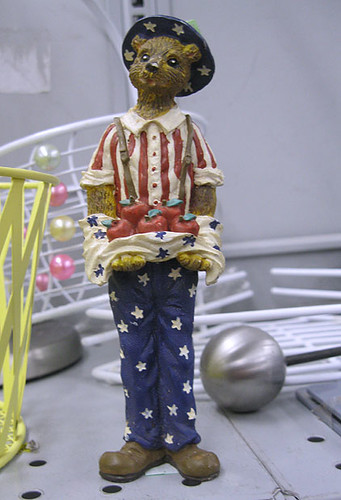 If there’s anything more patriotic than a furry holding a lot of fruit, I am not currently aware of it. Those are truly awesome pants. Not everybody could pull those off. Most people wouldn’t try, I’m guessing. I’m not sure about the hat, though. Maybe you should give that to George, he needs a little more color in his life.

Uncle Sam Rave Shirt from Salvation Army on South Congress near Ben White; American Angel-Peg from Goodwill on 183 near 620; “George” and Patriot Bear from Goodwill on 2222 and Lamar. Happy 4th, y’all!