Not everybody has felt the magic, the awesome grandeur, that is the Deathhorse Experience. Many people haven’t. Many people that are, in some small sense, slightly better off, haven’t. Which is not to say there are winners and losers in “Deathhorse.” To my mind, anyone published by the American Library of Poetry is a winner. It’s very “Special Olympics” in that sense.

So celebrate with me…the return of Deathhorse. 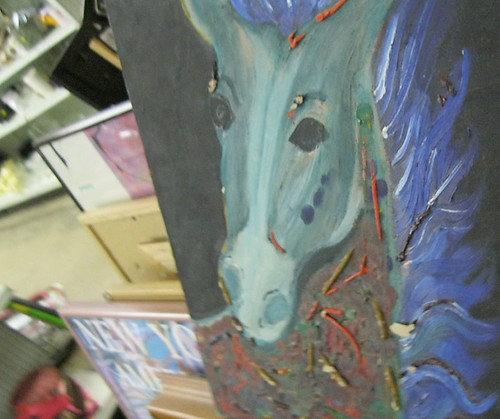 File this one under “Sins Committed Against Multimedia.” And I’m not even sure where to begin on those sins, for they are many.

Being a child of the 80’s, I remember when puffy paint made its debut. It was magical. So magical that it did, in fact, get put on every tee shirt ever made. I’m betting Ronald Reagan and Gorbechov made puffy paint shirts at Camp David. And then we, as a culture, moved on, because thick, somewhat random globules of pain are UGLY.

Although not quite as ugly as what happens when you yank the stuff off. 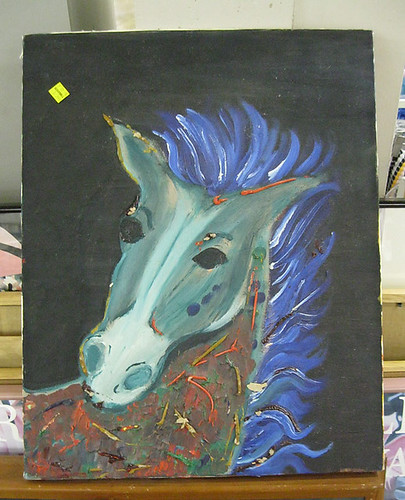 Poor horse. Poor horse with the denuded ear. You didn’t deserve what the 80s did to you.

The eyebrow jewelry was an innovative touch. It would give the entire thing an “anime” sort of quality, if it wasn’t very small pebbles, and if the horse wasn’t obviously deceased. Covering it with bits of random paint and splotches of dried blood was NOT a wise choice. I don’t know what the artist’s intended effect was, but I don’t think it was “advanced decomposition.” Gluing lots and lots of pieces of grass and dirt certainly adds to the effect there. But if “Zombie Horse” was your intentâ€”and not just the name of a really great drinkâ€”why the blue hair? The entire thing looks like Starlite’s necrotic half-brother. They don’t talk about him in Rainbow Land. 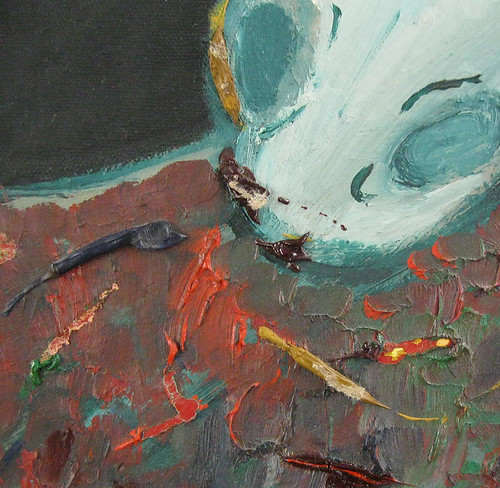 Not after the time they saw him feeding, anyway.

Goodwill at 183 and Research. Oh, if you were flesh and blood instead of a retail institution, the fun we would have.

One Response to “Not enough Deathhorse”