I always feel a sense of vague guilt for these posts. Not a LOT of guilt. Perhaps I should lay the guilt at the feet of the crafters themselves, but I’m not sure it would stick. 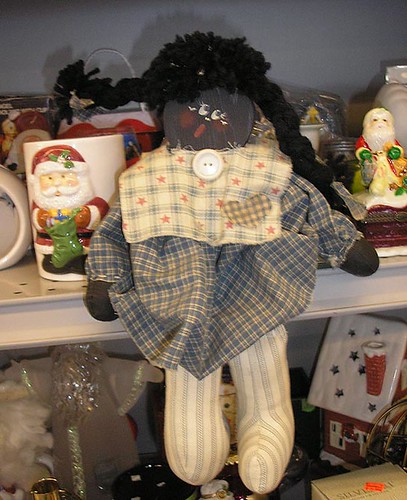 Question: Why was this in the Christmas display? What part of this screams “santa” or “elf” or “good idea”? In her defense, I’ve definitely seen worse examples of Country Crafting. Like the doll whose body was a giant blue cube. If only someone had thought to add this head to a blue cube, I could have finally said “okay, thrift, I’m done, you win.” But, no.

The legs, the feet, are amazing.Massive engines of mobility, huge tree-trunks bearing their owner across the land, hearkening to an older, primal period where giant racial stereotypes roamed the earth in search of food and Vaudeville theaters. I do worry, though, that her head will roll off, bouncing away down the road. I think it already did, that hair is glued at an angle that could generally be described as “rakish,” or just “unfortunate.” 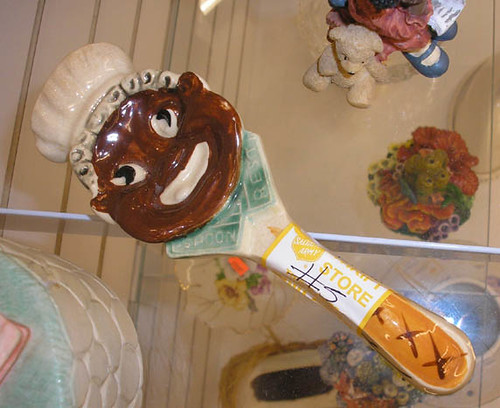 And another fun game of “guess the subtext!”

I’m a messy, messy cook. And at the end of a crazy night of spaghetti and olive oil and buffalo wing sauce, my stove looks like an imitation of a Jackson Pollock painting, and whatever the heck I had my spoons sitting on looks like a bib at a cherry pie eating contest. But, like, the loser’s bib, one who seriously overestimated his pie tolerance. So…do I really want to do that to a face? Even if she’s a happy face with a wide, spoon-holding grin? We’re out of the kitchen and into some very weird sauce-fetishism here.

Unlike most Mammies, this one is dishwasher-safe. So, that’s some relief. I’m still not comfortable with a piece of kitchen equipment that says “Sauce me, baby,” even if it looks like it would enjoy it.

Mammy spoon from Salvation Army on 183 and Metric, Round Head Doll from Goodwill on Brodie in South Austin

One Response to “Apologies in advance…”