Thank you for not smoking

…Hmm. Maybe I should have saved this guy for Christmas. But after all the damned bunnies, it’s good to get back to something a little more cheerful. 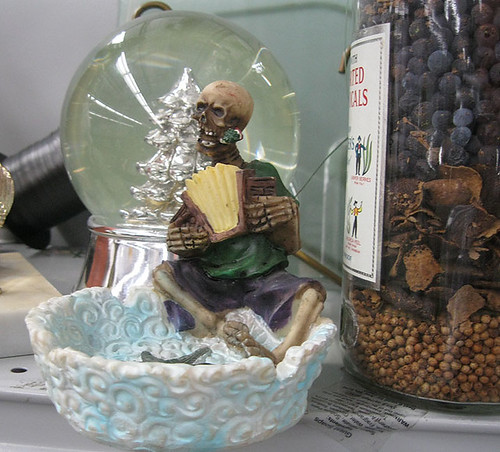 I like him, he works on levels. Just to start withâ€”and I’m guessing that he somehow escaped from a headshop to wind up in a Goodwill’s crapateria, so this may in fact be unintentionally ironic, the corner smoke shop is not America’s bastion of subtle nuancesâ€”the idea of a skeleton hovering over an ashtray really works for me. It says, “Say fare-thee-well to your fetuses, oh pregnant females.”

For reasons that are not clear to me, he’s playing a pendaflex accordian file folder. I’m not sure what’s going on there, but it’s very secretarial. “Arrr…me and Davey Jones just got back from Office Depot. That be a fine, fine office supply and stationary store, matey, it is. Now if you’d be helping me with that chest and those barrels, there, they be having a special on post-its and Almond M&Ms, and I thought we’d stock up for the crew.” And I’m okay with someone playing an accordion file folder, that’s your basic level two whimsy, textbook stuffâ€”I have NO idea why he’s apparently chewing on a World War II fragmentation grenade. That’s just dangerous.

Oh…no, that’s not a starfish in the bowl of the ashtray. Once again, the magic word here is subtle. 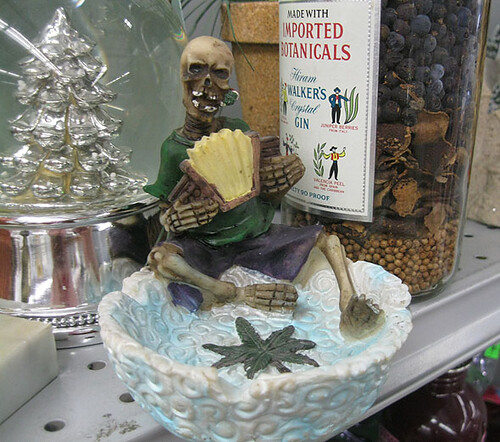 In the background, please notice the bottle of DIY Gin. Have you ever heard of one of those country craft “instant soup” gifties? It’s beans and some dried herbs? This is pretty much the same thing, but with gin. Just add water. Or possibly just add vodka, which seems like a pretty good way to start the week. The recipe is apparently three cups of juniper berries, a heck of a lot of dried fruit of some sort, some twigsâ€”yum!â€”more coriander than is usually found in a typical Thai restaurant, and some boll weevils. Enjoy!