I’m thinking that’s the marketing slogan Nike’s ad team rejected. Up there with “Tragically, the footware is at fault,” “I’m afraid it’s the pumps,” and “Needless to say, it was the plimsolls.” And yet, you can’t argue with the stark reality of these clogs. If it’s anything, anything at all, it’s got to be the shoes. The people demand totality. 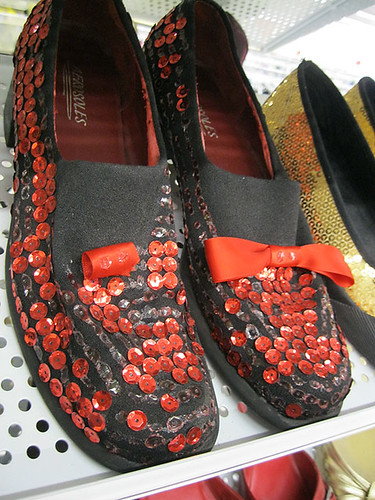 Imagine if Dorothy only wore comfortable shoes. And when she crushed the witch under her heel, and I’m pretty sure that’s how the story went, she contracted some unfortunate condition that you can only catch from infected witches, a morbid condition of the shoeâ€”sort of a sandle-mange. And for weeks and weeks, her ruby slippersâ€”or possibly sequined broguesâ€”slowly lost their glitter, dark bare patches spreading across them like mange, until finally she was taken out back and shot like Old Yellar. And I have to say, ever since the Wizard of Oz went public domain it’s been MUCH more fun to read, with good solid endings and none of this mucking about with broomsticks and sequels.

Which makes finding two pairs by the same designer in the same week some kind of magic. 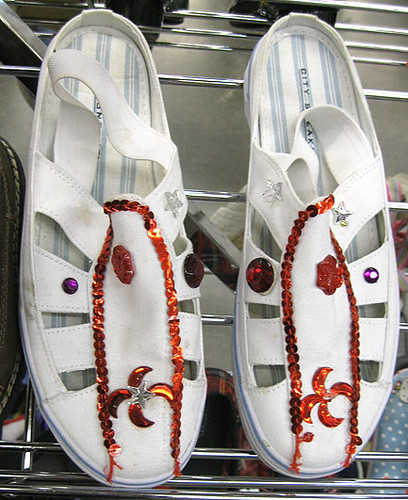 North Austin was obviously blessed by the Horrid Shoe Fairy last October. It must have been unusually naughty.

We’re clearly edging into, if not the limits of what superglue can do, at least what it should do. It really would have taken very little effort to add some pizzaz to these little sandlesâ€”sadly, it also took very little effort to glue a couple of beads and a string of sequins on them and call them art. Mother’s day? 11th anniversary present? Post-divorce anti-gift? You be the judge!

I like the sparkly little thing near the toe. I don’t know if it’s a beautiful star, some kind of fruit dessert, or a new, sparkly kind of marine life. But I’m really leaning toward the latter.