I knew I was supposed to do something today…what was it? Something…something…Ach, it’s going to be hanging over my head all day! 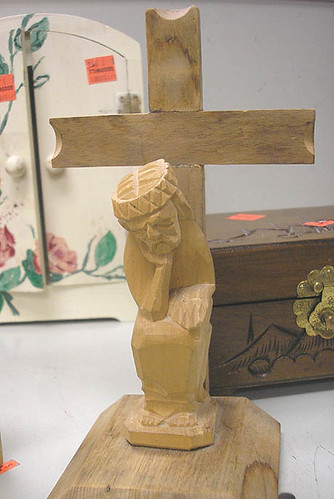 One of my favorite things about the “Last Supper” picture is how it looks like one of the Marys has grabbed a camera, and everybody’s squeezing to get into the shotâ€”that, and how everyone’s sitting on one side of the table. It’s like God himself staged a publicity shot. It’s a wonder none of the disciples is putting a “rabbit ears” on Peter, they were always ragging on him.

Frankly, though, the entire thing looks a little claustrophobic. It would be a LOT easier to fit everyone at the table if they were one amorphous lump of flesh.

One thing that a lot of people did not know about the last supperâ€”but when you think about it, it makes a lot of sense, what with the extremely high Hebrew content of the eveningâ€”was that it was actually bagels. And small rocks. 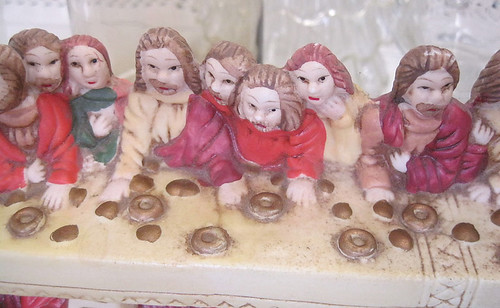 There weren’t a lot of takers on the small rocks. And this horrible, awkward silence when Jesus said, “This is my body.” And Simon said, “Oh really? Which part?” And usually Jesus is really good on the snappy comebacks, but he was having a bad evening, and just shook his head sadly. The evening kind of went downhill then.

It’s also not widely known that fully half the disciples were conjoined twins. 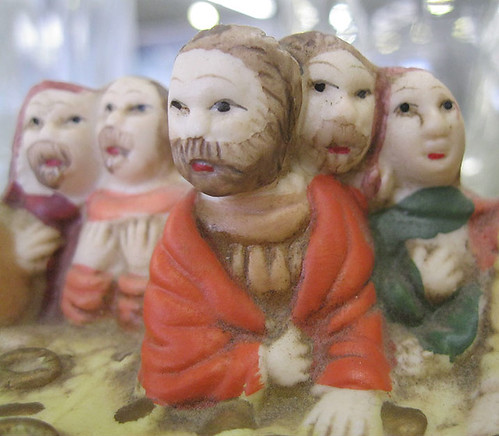 They wore thick heavy scarves to disguise the fact that they had vestigial heads wobbling on their shoulders. Sometimes three, four heads. Scary stuff. 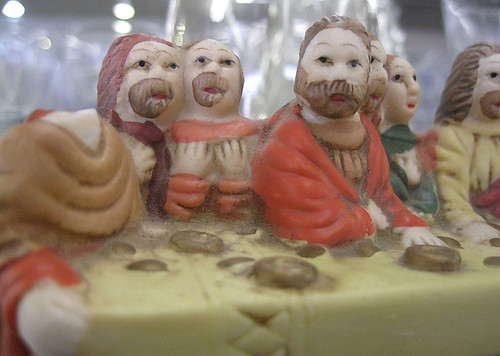 Mind you, not everybody brought their extra heads. Bartholomew left his head at home. He totally didn’t get into the multicerebral spirit of the thing. It was supposed to be a big surprise for Jesus, everybody’d leap out and say “SURPRISE!!! Two-head party!” 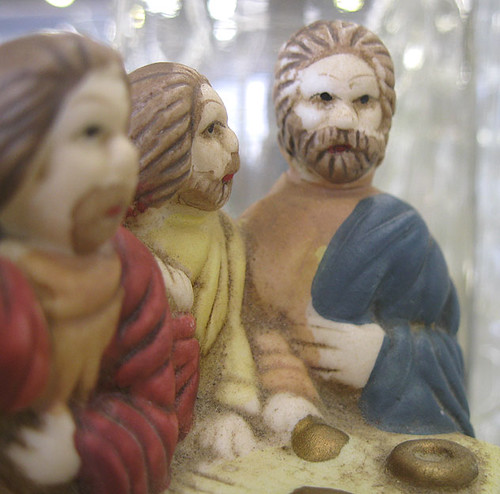 And SOME people didn’t get the updated memorandum, the one that said the theme was “vestigial heads” and not “cheesy 1940s werewolves.” And then Matthew started copping an attitude about the whole thing, said that Simon kept changing plan at the last minute, he was ALWAYS changing the plan at the last minute, and Judas left in a pissy huff, which was really it. Thaddeus was going to take Jesus out for breakfast, but he disappeared, and the next time anyone saw him was Easter and all the restaurants are totally full after church, PARTICULARLY on Easter. It was generally agreed…there had been better Fridays.

Last Supper from Texas Thrift, near 51st and I35. Frustrated Jesus Glowers on Chair from 183 and Metric Goodwill.