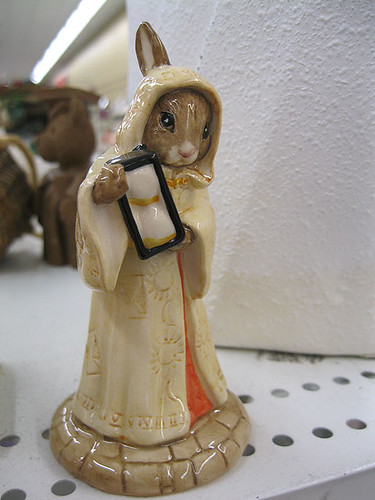 …Oh spirit of Easters yet to come, I fear you most of all.

There is a chance I only have part of the puzzle here. It may be that there was a series of rabbits meant to represent the holidays, and this was the “old new year.” Perhaps there was an all-bunny version of Piers Anthony’s “Incarnations of Immortality” that ran on Cartoon Network for four weeks before it got cannedâ€”probably because they ran it next to Spongebob Squarepants, and the two shows were just too cerebral for the after-school demographic.

But I really like to think that, for some half-crazed ceramic artist somewhere, Death takes the form of a one-eared rabbit clutching an hourglass. Or maybe the reason that it’s only got one ear is that it’s actually a sundial, and as the sun moves overhead, the shadows move around the hem of the rabbit’s robes, telling you that, enigmatically, it’s slit-hem o’clock, and that probably means it’s time to take the pills the nice lady left you.

The missing ear was the seconds hand. 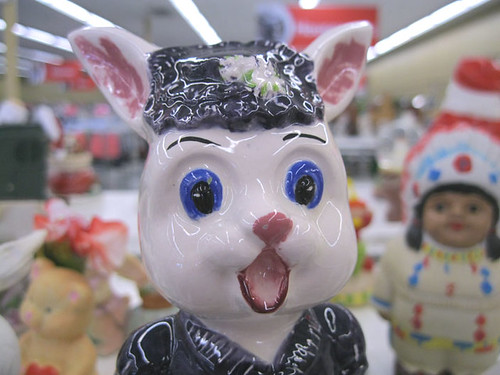 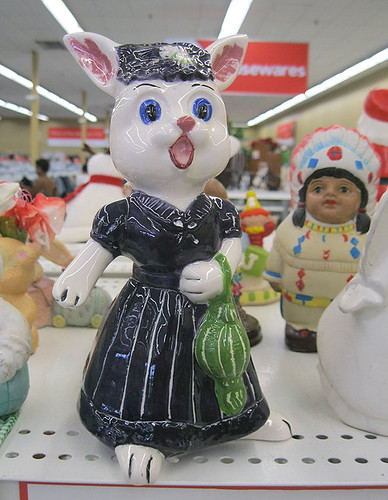 The easter bunny stumbles back in shocked horror as the massive, slobbering, St. Bernard stumbled toward her. Bits of egg and cheap chocolate flecked its muzzle, and second-rate marshmallow foam mixed with the rabid froth drippind down its jowels. It lurched forward, wondering if, when the rabbit stopped screaming, the throbbing ache in its head would die with it.

In the back, an Indian looked on fatly and passively. She knew all the steps of this dance, for she had seen the end of this story on IMDB, and that which was fortold could not be postponed. 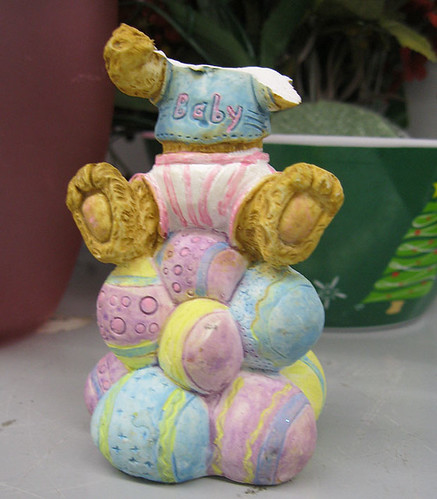 ….Easter does strange things to a man. 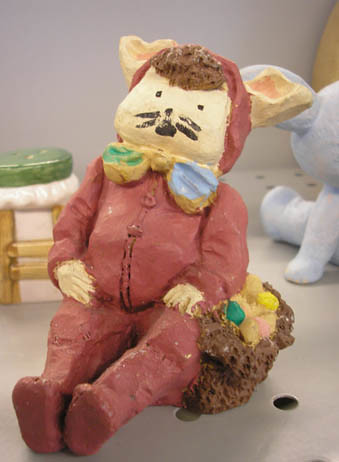 It’s probably the messed-up chemicals in the “chocolate.” Which is actually an exotic distillate of benzene and certain heavy metals, with a bit of potassium and some tar to make it turn brown, guar gum for texture, and parrafin wax for bulk. After a couple hits of that heady cocktail, ANYONE would fall back in their PJs, eyes tiny points of madness, and wait for the ride to end.

Odd thing about this particular piece of “art”â€”notice that the ears are the same color as the head. I’m thinking this isn’t so much a cute costume as a way to hide his monstrous deformity, and his parents let him out to see the light of day only on Easter, Halloween, and that furry convention every August.

He’s used that basement time to weave a clever basket out of 12 years of his own hair clippings. It’s good to do crafty things when you’ve got a few spare hours.

Shocked bunny and Grim Rabbit of Inle from Savers on South Lamar. Rabbit boy with cheap moustache from Salvation Army on Metric near Peyton Gin, and “BABY” from Goodwill on 2222, Austin.