Another from the “huh?” files 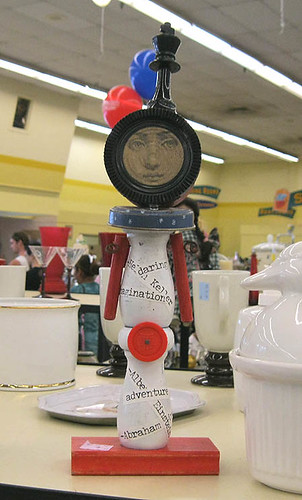 Now, you’re probably saying “Great, another one of those.” But let me tell you, this is vastly different from the other chess-influenced, poker-chip-headed dowelmonsters that you’ve seen before. Unless you’ve been to Dowelmonstercon, in which case, you’ve probably seen this already.

This one has a red button.

Which is for the best, if it didn’t, its stickers would probably fall down around its ankles. And we’d never learn what Einstein, Helen Keller, and Lincoln share in common. Adventure. Daring. Imagination. They all wore chess pieces on their head and had strange womanly faces, and intimidated their rivals with dangerous peg-arms. Sometimes, they would flail them around wildly, and shout “Danger, Will Robinson!” Except for Einstein, who might possibly have shouted “Sie sind in Gefahr, William Robinson!” Einstein had options. 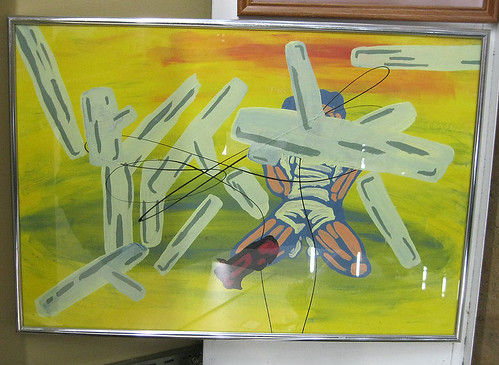 My money is on a Cubist protest of last year’s cancellation of the Brazillian World Cup match on account of giant Anthrax bacillus. Although I’m not sure what the suggestive red thing is. There’s not a lot about this picture that I’m sure of. Is the black swirly part of the picture, or a condemnation of the picture? Are those floaty things bacteria? Ice cubes? Throat losenges? Weltschmerz? Is the fellow so dynamically screaming “Noooo!” a soccer player, tennis player, or wearing boxer-briefs and a Hanes tee shirt and getting ready for bed? Where does all this take place? The screaming void? Someone’s lawn? In a giant cup of egg drop soup?

Dowel-thing from Savers on South Lamar, strange art from Goodwill on 2222, Austin