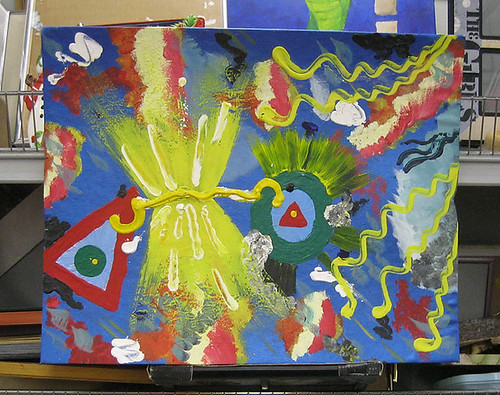 Years from now, someone will come up to me and say “you remember that picture you were telling me about? The one that looked like the ship from Asteroids being attacked by pasta? I will buy that picture off you, my friend, for 1.3 million dollars.” And I’ll start crying, and say “will you give me a thousand for a photograph?” And they will say, “no.”

So, be with me as we discover a new artist for the 21st century. Your guess is as good as mine which end you hang the darn thing from. Are the squiggly lines coming down like glorious heavenly beams to EXPLODE the strip of turkey bacon? Or do they represent the deep and primal sea, boiling up from below, lashing like tentacles at what, still, seems to be turkey bacon? Is that an olive inside the giant red wedge? Does the red wedge represent the masculine principle, and the circle abstractly represent the maternal nature, both of which contain the other, linked eternally together by…uh…nuclear pasta and high-velocity cheddar fries, but separated by, again, turkey bacon?

Look closely. You may see God. Mostly, though, I see bacon. 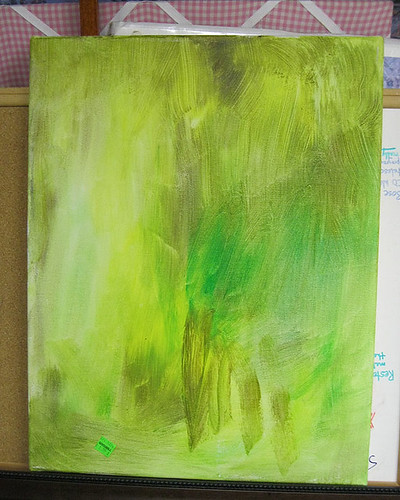 Surprisingly, I’m not seeing any bacon here at all. I don’t really know who the artist is, but I rather assume they were going through their green period. I should have figured out a way to wear this for St. Patrick’s Day, except the brown squiggle looks like another fun round of “name that medium,” the game where everybody’s a loser.

The best part of this, though, is how many times you can look at the image without actually noticing the pricetag.

This abstract expressionist double-header from the Goodwill on 2222 and Lamar, Austin.

One Response to “This end up?”