I took a lot of photographs of nativities this year–and really, every year. I don’t know why–the little kids seem to enjoy rearranging them, shuffling pieces around, and I do think the sight of the entire holy family gathered ‘roud a manger to gaze upon a kid half again as large as the camel is endlessly amusing. Most of these I’ve tossed, but a few linger in my heart.

My relationship with this piece evolved over a month, as pieces would move around the shelf, new ones would surface, new pairings would turn up…and besides that, it looked like the British Gay Men’s Choir dramatizing “Silent Night,” or possibly “We Three Queens.” For the longest time, there wasn’t even a Mary (Or else, they all were?). It was an all-boy’s Bethlehem club with too much eyeliner, and it got weirder over time. 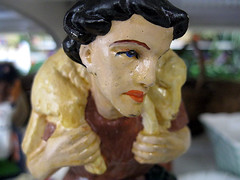 “Some people ask me, ‘Why where a golden labrador to a Christmas Party?’ And I say ‘Darling, with this face, I can only hope they’re looking at the dog.'” 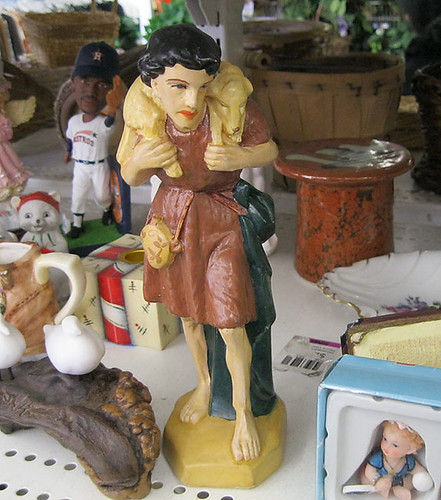 “Besides, it went with my canteen.” 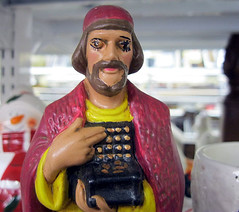 “It’s not gold, babe, and it sure as Christmas isn’t frankincense. Ferrero rocher chocolates, love. Nothing but the best. Maybe he can take some back to heaven, they may not have them there yet.” 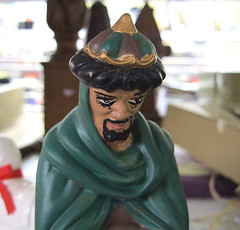 “I was going to bring the frankincense, someone has to, but I can see that we’re going to have to work our way up to aromatic resins, love. Let’s start with those swaddling clothes, I can see we need a divine intervention here.” 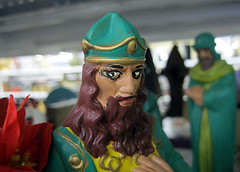 “Well, actually, I bought the gold, the myrrh, AND the damned frankincense, and let me tell you, I had to go to all three Nordstroms before I was able to find Martha Stewart’s fall ‘Myrrh’ line, and the lines were beastly.. But I tell you what.” 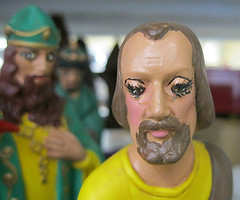 “I’ll take the shepherd back with me, and we’ll call it even-stevens, ‘kay?” 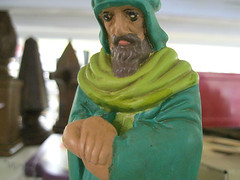 “I don’t know what’s going on. We were going to have a nice, quiet Christmas dinner, and then the whole place was filled with the court scene from ‘The King and I.’ With musical numbers. Mary, I’m going to go play cards with the shepherd. Let me know if your friends are heading out.” 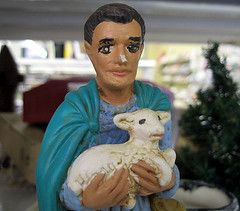 “Yeah, if I could just drop off the sheep and, you know–it’s getting a little crowded in here.” 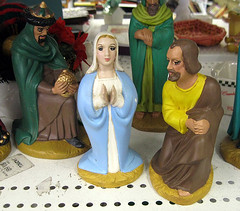 “Mary…you said these people were leaving…” 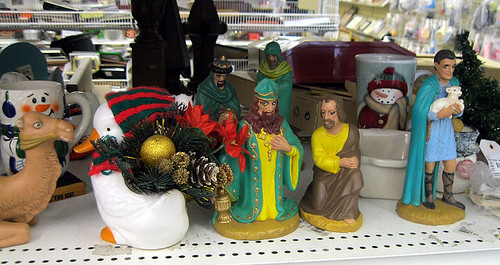 “Yeah, I’ll just take my sheep and, you know, go…away…like to Egypt, far away…” 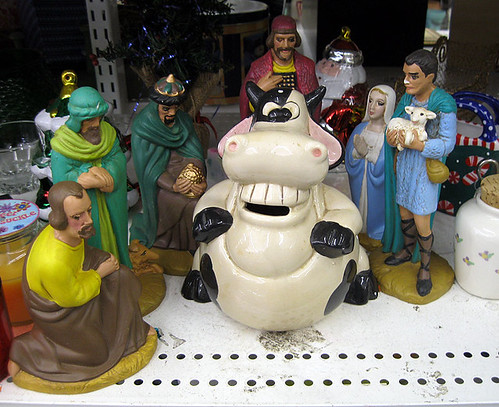 Yeah, I got nothing to say about this. I hope they brought enough offerings to appease it. 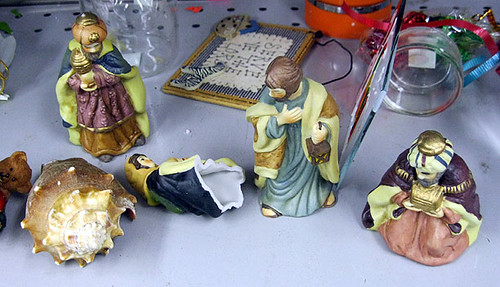 “Mary? MARY? Would you put that stupid frankincense down and call 911?” 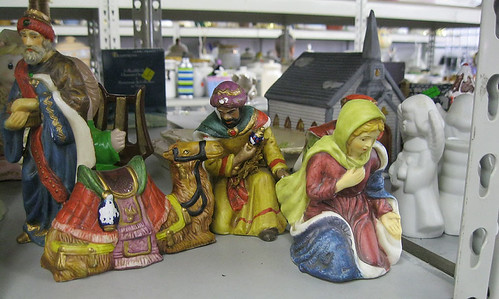 “People don’t lose babies, Mary.”
“He was just over here. Really. Maybe the camel ATE him.”
“He was the MESSIAH, Mary.”
“I KNOW he was the Messiah, Joseph. Quit riding me on this. Even Messiahs can crawl off and hide behind the furniture. Be useful and look somewhere.” 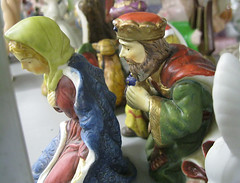 “Maybe somebody has seen him in the inn next door? Just take a few breaths, we’ll find him. 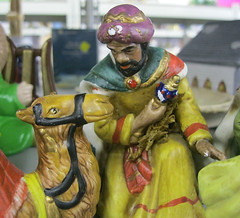 “If you ate the Messiah, you are not getting ANY more myrrh, I don’t care what kind of myrrh-faces you make.”

…The following nativity may shock you. I’m not sure who thought artificial soapstone was a good idea for a nativity scene, but here’s the tragicomic results. 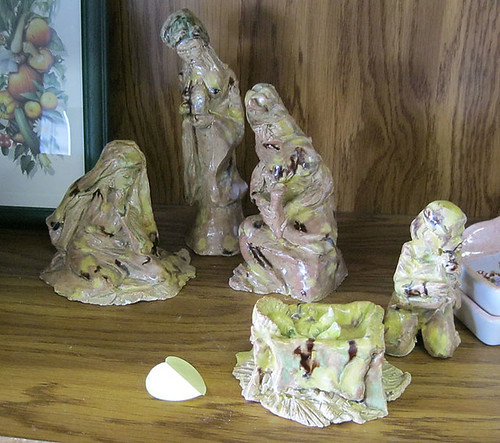 “Unpleasant” doesn’t begin to describe this, and I’m puzzled by the fact that it wasn’t there a week later. Either someone bought it, or a benevolent shopper “accidentally” elbowed it off the shelf, though these guys look pretty durable and probably could have survived the fall. Unless she jumped up and down on them, which, really, I’d be okay with. 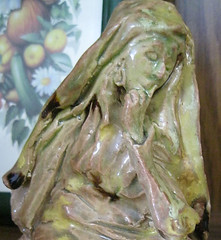 “Does this soapstone gown make me look too much like I just had an appendectomy? Or does it just make my arms look like withered, skeletal vestigial limbs?” 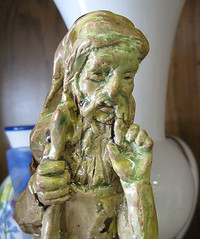 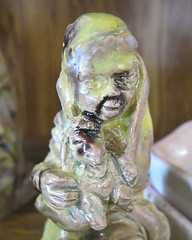 “I ran here as fast as I could. Yeah, the sheep threw up a couple of times, but that’s okay. Hey, where’s the messiah? Me and old, caustic-bile Betsy will try not to drip too much on him.” 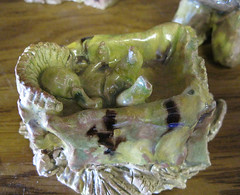 “Am I going to look like that when I’m older? Crucify my now, seriously. Get it over with. God, where’s his eyes? WHERE’S HIS EYES? And what is that horrible black tar leaking from his mouth? Mooooom!!!!” 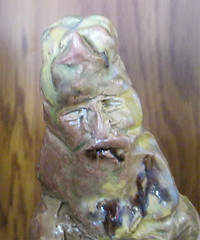 “Jest point me to the baby. Oh, I love children. Look, he’s excited to see me. Mary, it does smell like he needs a change though.” 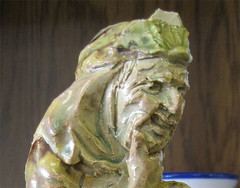 Gay and angry Nativity photographed during November, Savers on Burnet. Broken Mary nativity, same. “Lost Messiah” nativity from Goodwill on Stassney and Manchacha, and horrible, horrible slimestone nativity from Salvation Army near 620 and 183.