Something stupid with a pig

As promised, here is your stupid ceramic pig experience. If your monitor is starting to show an unusually large amount of pink, we offer no apologies, only the unadulterated pig truth. However, we do suggest this fun activity–stare at the pig. Really stare at the pig. Then, suddenly look away. Whatever you look at will be surrounded by a ghostly green porcine aura. Plus, you may have an entertaining nightmare later on. 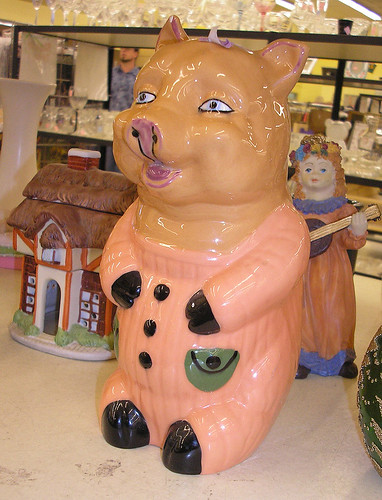 When I first saw this, I thought “OMG, pig nipples! Look at them!” Then there was a bit of a let-down when I realized, “not nipples, pig buttons,” which took me down a few notches. But then, in a flash, I thought “Wait! Who says nipples have to come in evenly-matched pairs? Maybe they really could run down the center of the pig, like a majestic ellipsis implying something left off, or implied within, a pig? What could a pig imply? What couldn’t a pig imply?” 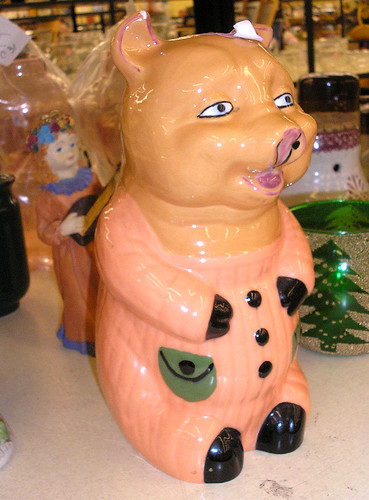 I think this one’s been huffing lipstick again. A neat little line of Apricot Frost, or maybe Mystical Penny (Really? Mystical Penny? That sounds more like a cover band than a shade of pink…) right down the center of the nose. Pigs really shouldn’t be allowed to do their own make-up. That should be left to skilled stunt-beauticians.

Happy little pig at Thrift Town, near Manchacha and Stassney. When St. Peter judges me at the pearly gates, and he will, I want the record to show that I did not make a Tammy Faye Bakker joke no matter how much it called to me.