Give me some sugar

Really, your guess is as good as mine. This gem is from “Next to New” on Burnet, a high-end thrift/consignment store which in general has impeccable taste–except for a glaring lack of anything resembling common sense when it comes to their “art” section. Their selection is frequently bizarre and their pricing is whimsical, to say the least. For a few weeks they had a large–like three feet high, two feet wide–panel of what seemed like a piece of gently adhesive spackle, in a gold frame. The weirdest part was they wanted $30 for it. I wouldn’t pay over $20. For this, though, they were only asking $10. Sign me up! 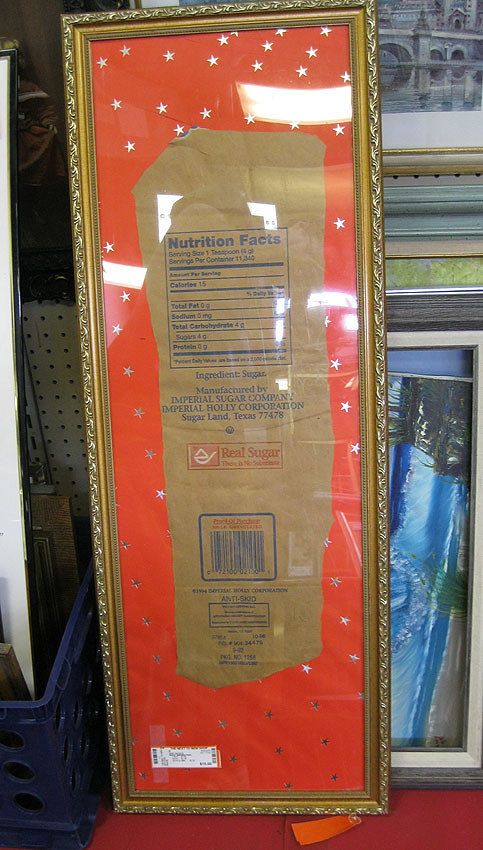 …Hmm…should I salute this? It’s kind of got a stars-and-stripes thing happening. It’s also kind of the side panel of a huge bag of sugar, which…well, there’s no good reason for that. Sometimes I try to get into the mind of the people who commit this kind of artrocity. But I’m at a loss here. Options:

(Okay, really, I doget this. After years of trying to winkle the tiniest amount of humor from pretty barren material, someone has clearly said, “Oh, sugar. Ingredients, sugar. That’s funny.” And, yes, it is in its own limited way. But I’m not sure I want to meet the kind of person that would surround it with stars like the Virgin Mary and frame it. I’m guessing the kind of loosy-goosy edges on the crop job is because they only let some people hold safety scissors, and there is the occasional second thought even then.)

One Response to “Give me some sugar”