This particular Santa is here to remind us that everything’s easier when your head is mostly hollow and made out of plastic. 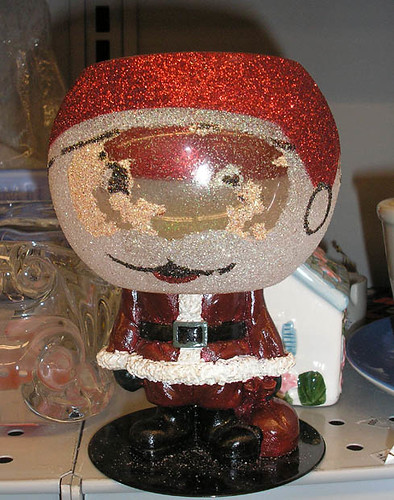 He’s kind of a shlep, but that’s okay, he’s mellow. And maybe his face is eroding away, but that’s okay, if his eyes finally go, maybe they’ll finally give him a little time off from making all those damned toys. Actually, his vision was pretty good until the mid-80s electronic period. Damn you, Nintendo, and all your individually-soldered parts.

His perfectly round head gives the vague impression of him having just stepped off the pages of “Peanuts,” or maybe “Family Circus,” where he left a long, dotted line from the North Pole to every house in the world with an income somewhere vaguely above the local poverty line. There might have been some vague joke about “I Dunno” and “Not Me,” but it wasn’t funny, really. Please let Santa scrape the rest of his face off, now, it’s the only way he gets by.

No, really, this was going to be a post about happy Santas! Let’s try that again. 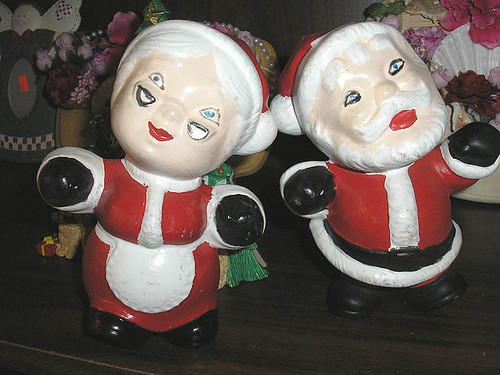 Go Santas! It’s your birthday! Except it isn’t, not really. That’s okay, it’s December 26, and you’re ready to party like it’s February! You’ve got your best suit on, and for some strange reason you’re wearing more eyeliner than Mrs. Klaus, but that’s alright, she probably helped you put it on. I didn’t know Santa did the goth scene, that’s actually a little surprising.

Are you also digging on Santa’s magical third eyebrow? I am. Also, is he licking his lips in a manner not entirely unlike the floating lips at the beginning of the Rocky Horror Picture Show? I think I saw him there last Saturday. “Brad! Janet! Dr. Scott! Santa? Rudolph??”

Once Santa finishes getting his Kringle on, he takes it to the floor for a slow dance, maybe “Santa Baby” or a nice, slow version of “Santa Claus is Coming to Town,” then he grabs his girl, holds her close, and… 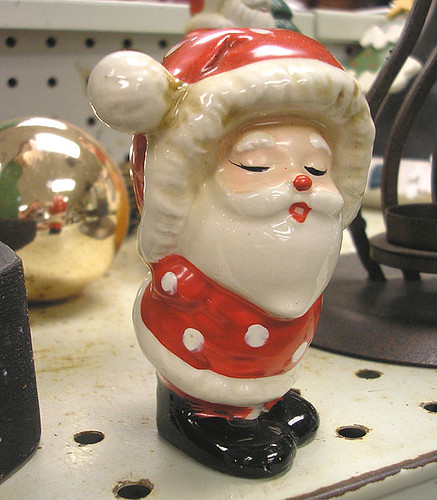 Oh yeah, Santa’s got you under the mistletoe, baby, wrapping his red velvet loves around you for the gift of Christmas love. Not sure about the little red patent leather booties and the cotton balls he apparently glued to his robes, but Santa’s a player, he knows what those north pole chicks dig. Heavy, heavy beards, apparently.

And who’s the lucky girl who gets all the Kringle, from January through November? 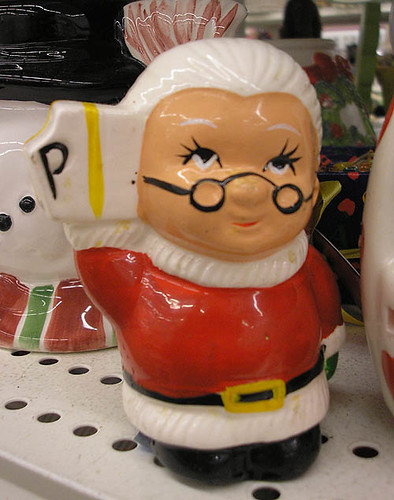 That’s Mrs. Claus, and she is hot because she is filled with pepper. That’s what’s in the box, pepper for all the good little boys and girls. And, wow, she’s got the same makeover artist as Ming the Merciless, but she makes it a little more ladylike.

So…did you ever want to know what Santa’s up to the other 364 days of the year? That’s right, he golfs. Only…maybe he’s not getting any younger, it’s been a few years since 4th century Myrna. Santa is, in fact, a bit of a duffer. No-one tells him that because he’ll put you on the old Naughty List and he tends to doctor his scores a bit, but it’s true, and no-one knows that better than Mrs. Claus. 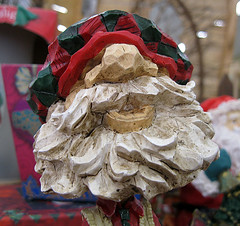 Santa! For the love of holly, watch where you’re swinging! 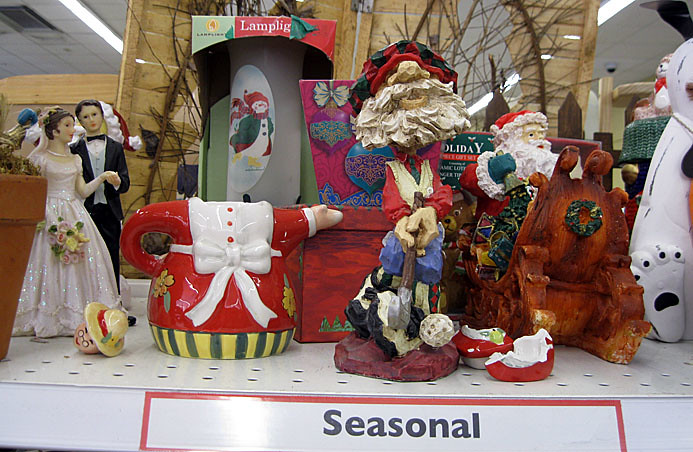 Oh the horror! Oh, the humanity! Why did someone let a ceramic Mrs. Claus on to the golf course? Why didn’t Santa NOTICE? Besides of course the hat pulled over his head and his ears plugged up because of the endless, endless jingling? Oh golf, oh Santa, gaze on the calamity you have wrought! 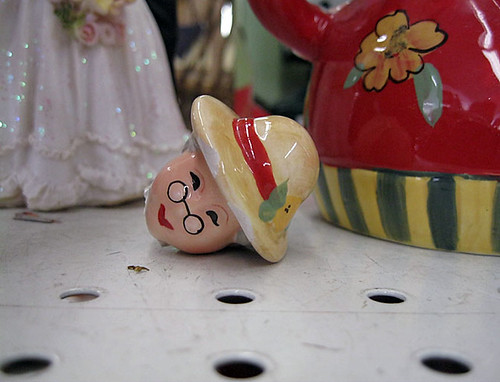 Heads and broken pieces of Mrs. Santa scattered across the green. Next time, switch to a wedge, Santa. You’re not to be trusted with those new metal woods. 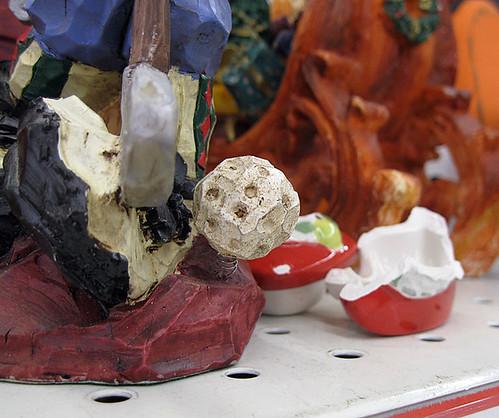