Whatever you’re going to say, we’ve heard it before. “It’ll never work. You’re from two different worlds. She’s resin, you’re ceramic. You’re better than him. She’s only interested in your money, when you’re dead and gone, claimed by that strange skin condition that doctors can’t even begin to diagnose, she’s going to flip you upside down, pull your cork out, and run away with your life savings. Don’t do it, he’s a fish.” 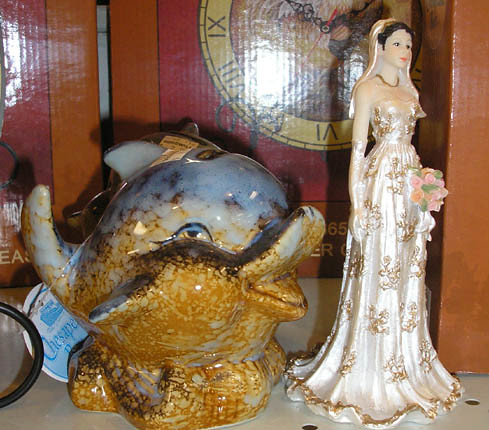 But he’s not a fish, he’s a living, breathing, mammal, with warm blood, warm feelings. And we’ve had ENOUGH of it. If a girl and a ceramic porpoise with a slot for coins on his head can’t make it in this world, it’s not a world we want to be a part of. So don’t tell us no. Don’t give us advice, just stand out of the way when we’re going up the altar, because he can only stay out of the water for like an hour, and my body’s fused into one large, columnar mass, and I don’t really change directions very well. This is our Happily Ever After, and if you don’t have something more useful to say than “Don’t marry porpoises and don’t marry cake decorations,” don’t hang around for the reception.