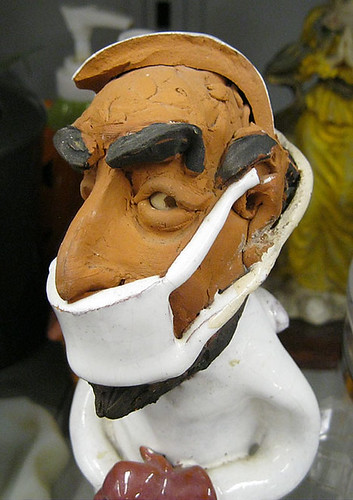 “So…tell me what, precisely, is hurting today. I’m there to make it…so much worse.”

Meet Dr. Cranium. On the plus side, he’s there for you even if you don’t have insurance. On the downside, he’s not actually there to help. Quite, quite the opposite.

Real doctors don’t have scary pointy beards that make them look like Satan Taking a Position in Nursing. But then, real doctors don’t have half their skull excised to show their brains. Look closely, you may see…dark thoughts. Thoughts that a thick layer of ceramic were only just barely able to contain, then, not at all. They burst free, leaping over the retaining walls of his eyebrows to infest the west wing. But you know, he’s okay with that. Let them wander through the emergency ward, infiltrate maternity. See what twisted things have escaped from his head, and what dire forms they spawn. 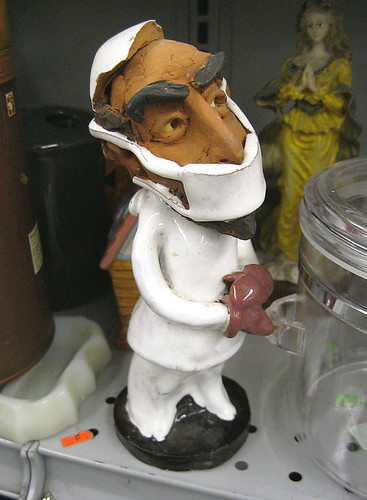 “Nurse, send in the next patient. And please re-wax my gloves, I want them to be extra-slick for the procedure. Oh? He’s got a cold? Send him in anyway, he’s getting a surprise procedure.” 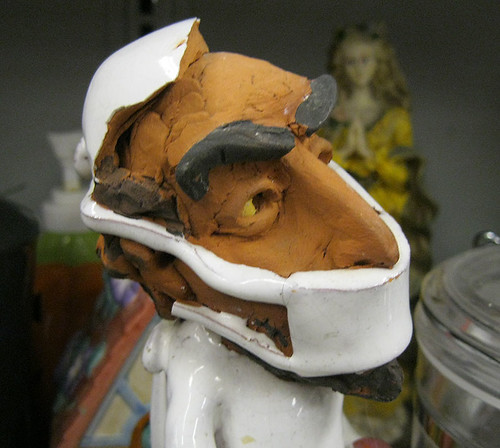 Urk. That eye looks like a sullen little ball of decay, like he had his eye removed and replaced with the interior of a devilled egg. And I think his lower jaw is held on with a suture. Oh, Dr. Cranium, I fear you most of all.

Dr. Cranium from the dread shelves of the Goodwill on 2222, Austin