It’s not their BEST-known animal, but the pouched cat of Australia had a long and proud history. They were a strange, stiff-necked breed, not actually related to the housecat at all, except in a sort of “read about it in a magazine, tried the same haircut” way. Unlike most marsupials, they could carry up to three offspring, one in its pouch, and two in its round, round cheeks.Â  The species is extinct now, accidents did happen.

Or, maybe, it’s some sort of strange cat-shaped gavel. Or a cleverly cat-shaped storage device that holds a single, precious green pea, or more likely three toothpicks. Except…except it doesn’t really. You stand it up, give it a single, beautiful legume, the cat throws itself to the side, the pea rolls out, the world basically ends. All this because someone forgot to give him a left foot. 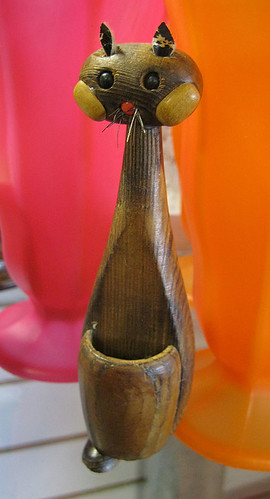 Well, they probably did. It was huge, remiped sort of thing, a great flapping monstrosity of an appendage longer than the poor thing is wide. But with just the one, it topples left, rolls about, flings itself from the shelf like a tiny, inexpensive lemming. No wonder its nose is red. 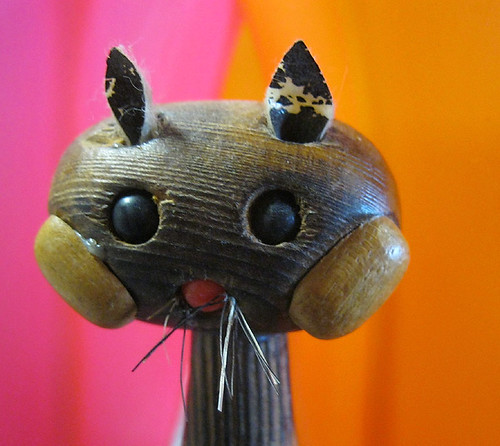 This is TOTALLY the front cover of my next album. The one with sixteen songs about clowns.

Our producer, Dr. Chance, asserts that this is not actually a cat, but it is, in fact, a mudkip.Â To Dr. Chance I say, Fah! Of course it’s a cat! It’s made of wood and has one foot, just like my inaccurately named cat, Nibbles, who doesn’t. Please keep these weird theories to yourself, sir.

Mudkip found at Salvation Army on 1325 near Round Rock