All the Shell Art

Shell art is a dominant thread in the world of Thrift Horror. We do not know what drives elderly craftsmiths and pre-schoolers, jaded high schoolers and tourist trap hucksters, to glue pipe cleaners and cowries together and call it art. But we thank them for their contributions. Unfortunately, or perhaps magically, shell art is “done.” It’s over, there is no more shell art. We have had a shell art epiphany, we have seen the glory of shell art and it is, truly, glorious.

It is not, technically, a “horror.” It is pure magic. 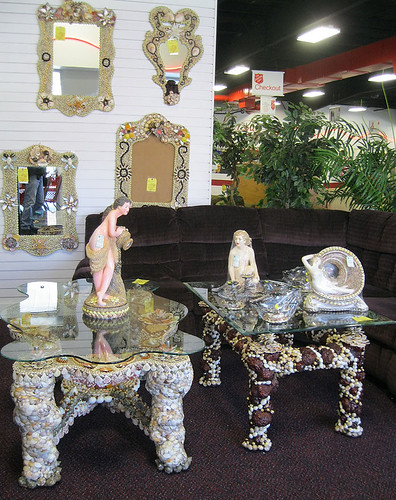 Oh, hey, you can see my pants in this picture. I’m glad I didn’t wet myself then, that’s a small favor. On entering the glorious gates of the Salvation Army, it was clear that this was no ordinary thrift shop. It had become a shell art museum. The front corner display–coffee tables entirely encrusted in shells, mirrors studded with starfish, mer-madonnas. Amazing! And the shellcraft? Sublime! 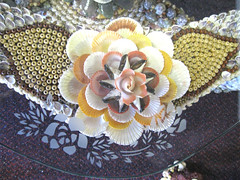 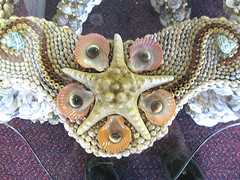 It would take an entire school district of disenfranchised youth, all the street vendors in Port Aransas, and a couple of senior centers on the side, working overtime for a year to create these shell masterpieces. Swirls, ornaments, flowers, all of them crazily baroque. Truly, we had come home. 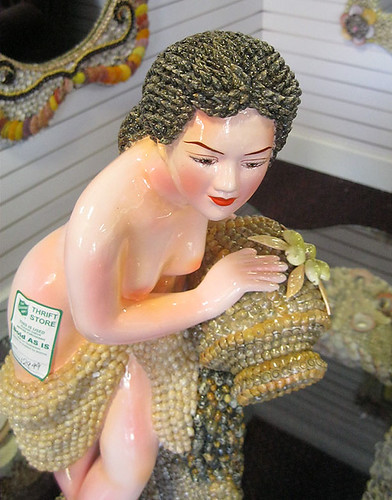 Do you like my hair? It’s cowrie. The vase is very small snails. Now, normally, you’d expect a few well-placed clam shells, but no, they chafe so. Take a photograph of the sarong, it’ll last longer, because it will probably shatter when I sit down. That, also, will chafe. 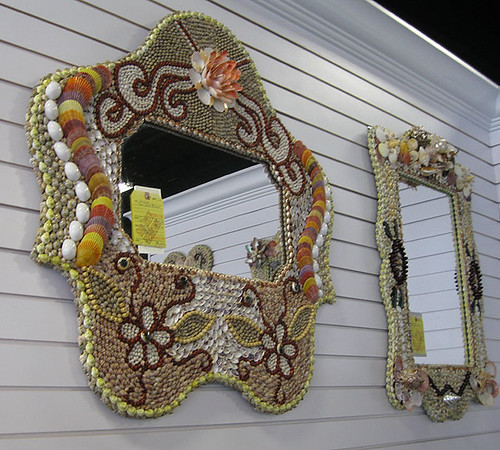 I think I may have started crying here, it was THAT GOOD. the lotus blossom made of little clams? I had to go outside for a cigarette. But it got better. No, really! 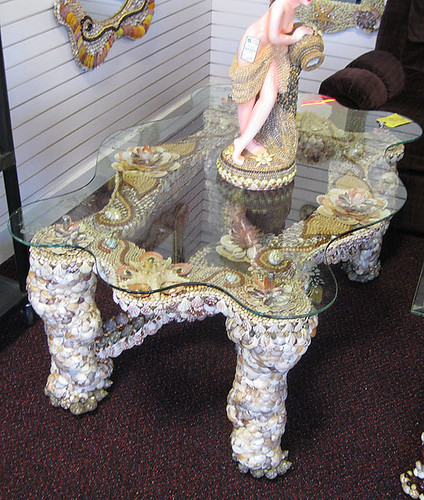 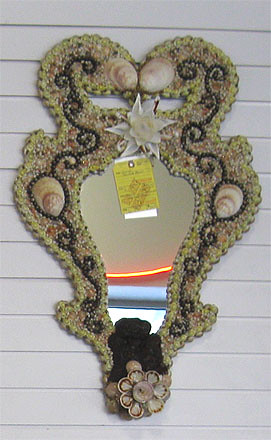 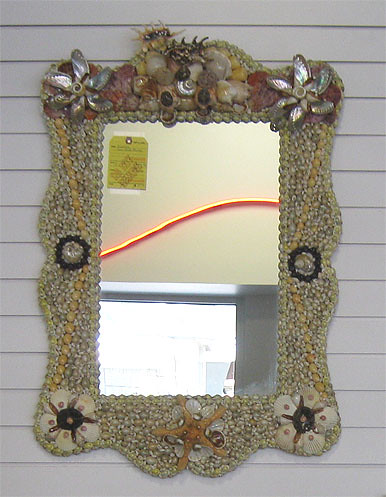 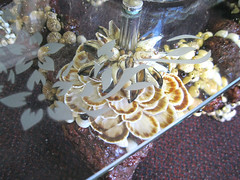 I had to move on, even though I just wanted to put some small votive offerings at the foot of Our Lady of Shell Hair and devote my life to her service. This was like shell Nirvana, but it had to end. Except…it didn’t. The glass display cases greeted me with INFINITELY RECEEDING SHELL BABES. 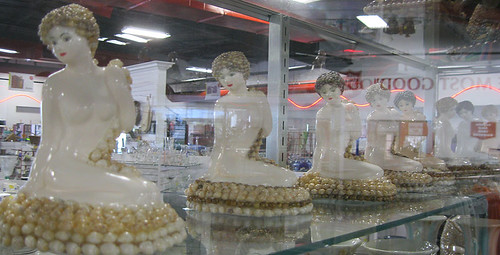 You may think that these are identical, but each one is a precious, precious flower. Made of shells. And they are utterly unashamed of their nudity, because they know…you’re looking at their shell wigs. 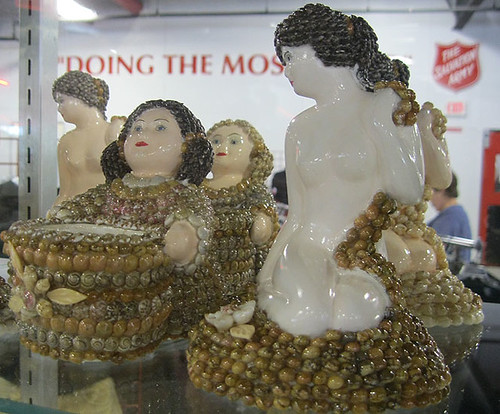 And just so you know, this isn’t a shallow depiction of naked, shell-wrapped flesh. This is a scene drawn straight from domestic life, where shell-wrapped servants would draw slightly crunchy baths for the lady of the house. “Bring me a loofah. It, too, should be made out of shells. The exfoliation shall be…decadent.” 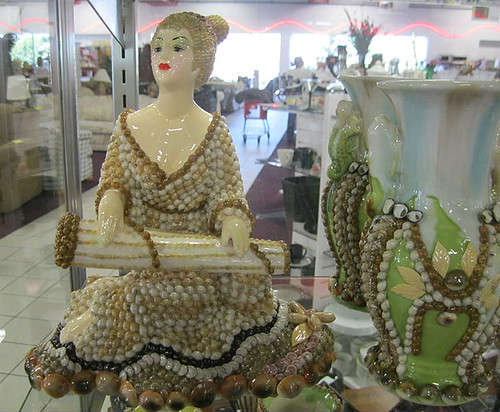 I’m not really sure what’s going on here, the little eye-like shells around her skirt kind of make her look like a villian from “The Little Mermaid.” I’m not really sure what she’s holding in her hands–some sort of bathmat? A roll of fabric? It’s not going to be any more comfortable than anything else in this display, I’m pretty sure of that. 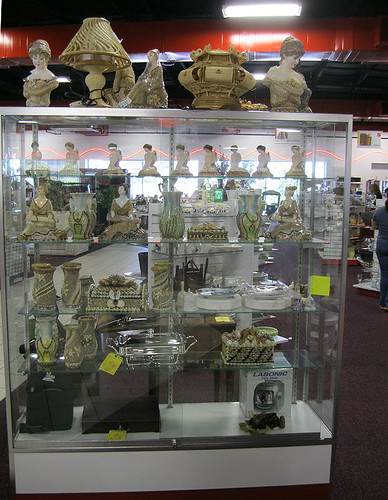 The story, as I understand it–and for once I had to break my vow of keeping a low profile and asking for permission, there was just too much to take pictures on the sly today!–is that a small business went under, or the owner retired, and they donated their vast stock of shelly wonderment to the Salvation Army. I really think they should have just opened some strange museum or something. It would have been…amazing. And apparently there was more in their back room? Good lord. The sea is bounteous indeed. 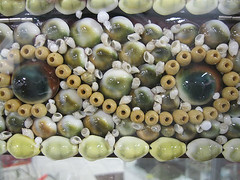 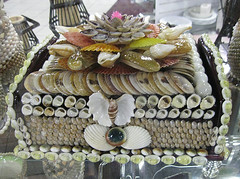 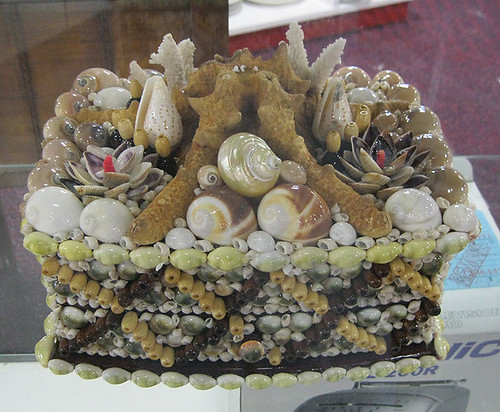 I know, I’m just posting pictures of things with shells on them, I really don’t have anything to say today. This was just so AMAZING I wanted to share with my friends :) If you’re in North Austin, this is the Salvation Army on 1325 just north of Round Rock. It’s absolutely worth the visit!

Next time, back to your usually scheduled crapola :)

6 Responses to “All the Shell Art”