Watch out, they spit. 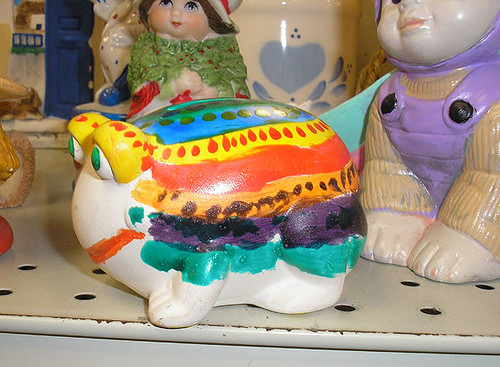 I do like a critter that can clash with itself.

There’s a lot to be said for freedom of expression, for leaving the constraints of the real world behind and committing art for the sake of art. But this guy does kind of resemble an acid flashback during a gay pride march (we suppose.)

We also do not have the foggiest idea what it is, even if was painted with fewer than ten colors. It may be a frog. Very froggy eyes, certainly. A wide, froggy mouth. We understand that there are certain frogs that look quite like this, after one licks them. The legs, though, are distinctly un-froggy, quite unfroggy indeed, entirely unamphibious. They rather more resemble a guinea pig or gerbil, both of which have no exciting side-effects when you lick them, except for a vague cottony sensation and a taste rather like cedar shavings (again, we suppose.)

But really, it looks more like Pac-Man than either one of these things. Or Mr. Potatohead’s odd and limited-release animal sidekick, Mr. Eggdog. All the kids in my neighborhood wanted Mr. Eggdog, they really didn’t make enough to keep up with the demand. The whole thing worked better if you boiled the eggs, of course, but wasn’t that part of the fun?

Once again, I’m pretty sure this is from the genre of “Generic white plaster thing that the whole family can paint together as part of a bonding experience.” And normally the teenage son just doesn’t get into the moment, paints everything in a bitterly ironic shade of radioactive blue, or invents a surprising new eighth dwarf that wasn’t in the original Snow White cartoon. But this looks like an entirely sincere piece of work, from someone that was totally engrossed in the project.

I do wonder though–why wasn’t it finished? Did the fire of inspiration gutter out after the aquamarine layer? Or was the special gold paint an extra $6? Did gentle hands carry the…frog thing…away, or was the artist triumphantly finished?

Much like the ancient statues of Easter Island, we may never know its meaning.

Goodwill near Manchaca and Stassney, Austin

One Response to “Watch out, they spit.”