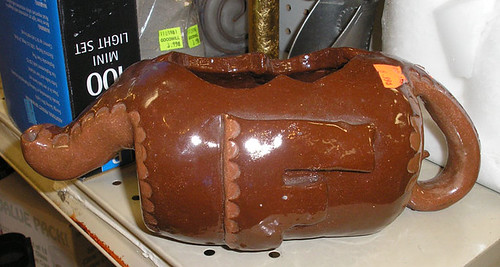 What will YOU put in this? Flowers? Freon? Some other fluid? Here at Thrifthorror, we have no idea, and we assume you don’t either.

For a teapot…maybe, still not sure what the “F” stands for…this one has a number of strangely animalistic qualities. The trunklike nose, and the little moon-sliver bevels and scallops, give the item an elephantine look, as if it hailed from a land where massive, ponderous kettles moved slowly through the marshes, blowing hot water through their noses on each other with a high-pitched whistle. 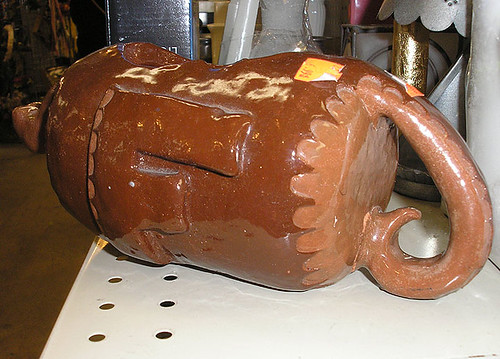 Or maybe it’s a dachshund, with a lovely curly tail, that’s been hollowed out and used to serve oolong or earl grey. “Yarp, it were difficult, and there weren’t no small amount of struggling,” he said, a reed clenched between his teeth. “But it doon stopped his barking.”

From other angles, it’s just kind of rude. 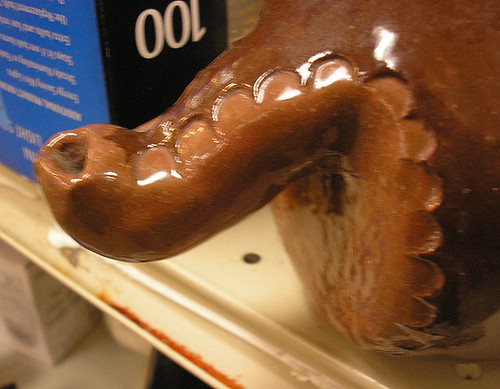 I mean, really. In all seriousness, what would you put in here that wouldn’t look completely inappropriate, if you had to provide a full breakfast service to your visiting aunt Gertrude after church? Orange juice? Tea? Certainly not cream. The vicar would throw a fit. 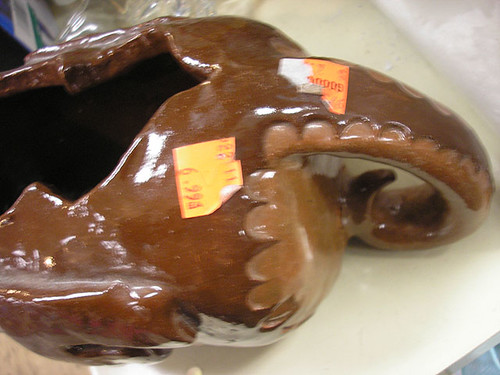 Identifying the poor thing’s species isn’t so difficult–it’s obviously some sort of hybrid of a nine-banded armadillo and a tapir. The real question is, “What does the F stand for?” My unkind inner voice says “well, it’s obviously the grade the kid got in Ceramics,” but that’s unfair–or tells a sad tale of self-defeat and self-sabotage that’s totally out of place in the world of crafts. Maybe this was pulled from the kitchen of a strangely domestic superhero–Full English Breakfast Man! perhaps, or the Fantastic Four Food Groups.

Or maybe there’s another 25 of them, and someone broke up the set. There’s a scary thought.

Goodwill on Stassney and Manchacha, Austin