I Bring You Peace 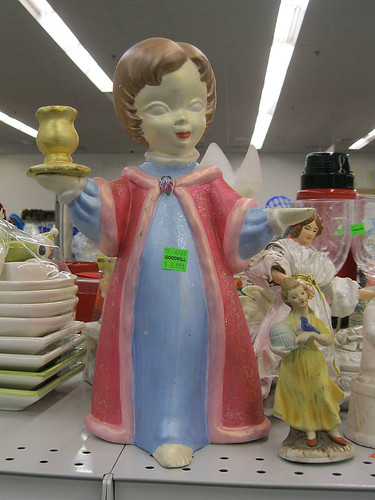 It’s just like a scene out of Chariots of the Gods?, but with a LOT more glitter. Well, a little more glitter, the ancient Mayans actually knew things about foundations, shimmer eyeliner and sparkle makeup than we’ve yet uncovered with our puny 21st Century understanding of cosmetology, and we’re still learning from their secrets.

There is the SLIMMEST chance that this is Jesus.

Okay, granted, I said that about three stuffed teddy bears and the Assistant Manager at Savers on South Lamar, but I actually mean it. It’s got a sort of “Infant of Prague” thing happening, and the little gem clasp has a certain saint-like quality to it. I guess the real answer there would be “what is it holding in its other hand. Or is it judging the weight of our souls? If your sins amass to more than this Chalice, which is filled with Purity, then your soul will be lost forever among the Precious Moments statues on the third shelf. Woe unto you!

If it IS Jesus, then it is perfectly appropriate that angels and shepherdesses should dance beside it, singing its praises. If it’s merely a 30-foot-tall blank-eyed child holding the Holy Grail, light pulsing from its carbuncle, then really I’d expect to see a FEW more shepherdesses there. Have a sense of occasion!

One of my other friends is strongly supporting the sciapod theory, that is, that this is a member of an ancient race with only one foot who can use their prodigious extremity to shield themselves from the rain. I told him he was being silly. If that was the case, it wouldn’t need the overcoat. But this little guy…girl…entity…does have an unusual degree of bilateral symmetry. 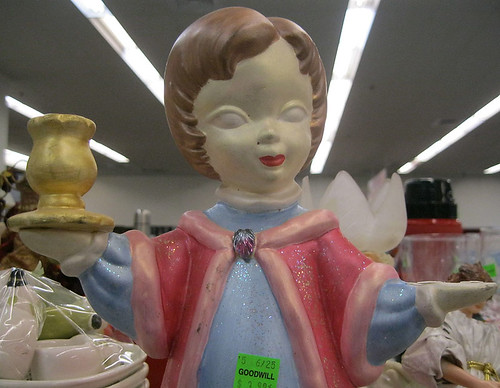 And huge, pale, staring eyes. And lips pursed with contempt. And some sort of strange, horrid roll of flesh around its neck, possibly containing its lymphatic system, or strange mind-controlling organs, or its limited capacity for empathy.

So, maybe it’s Jesus, or maybe it’s a pale-skinned outsider from the Alphan Quadrant, holding a goblet of nanites that will soon remake us in its own image. Either way, make way for our new alien overlord!