It might be a monkey. It’s got a sort of ape-like profile to it, definite simian sensibilities, a broad, hollowed nose and heavy jaw that says, “That’s Mr. Baboon to you.” There’s monkeyish potential there. But I’m pretty sure monkeys don’t come in that color. 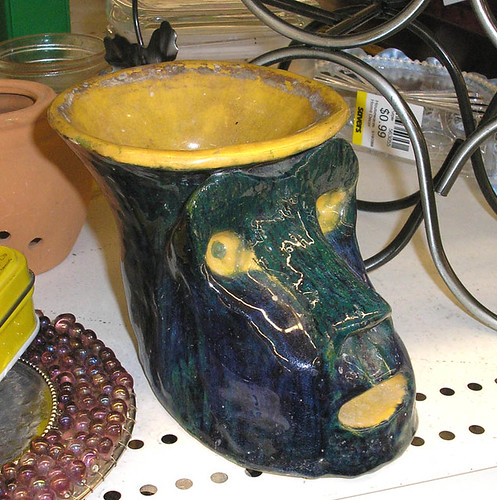 I’m not ENTIRELY sure, because monkeys come in some truly whimsical shades of purple, but somehow “corroding copper over navy blue, inlaid with cheerful lemon” doesn’t strike me as a color palette normally found in the primate house.

If it’s not a monkey, though, I’m going to run low on options. There’s a certain happy resemblance to the statues on Easter Island, but scaled down, surprised by a loud noise, and used to hold an arrangement of wilting petunias. It MIGHT be a charming little candy dish, though with that whole “kind of like a monkey” thing you’re edging into that horrid scene toward the beginning of Indiana Jones and the Temple of Doom–you know, the one where Kate Capshaw comes on screen.

Maybe that was unfair. 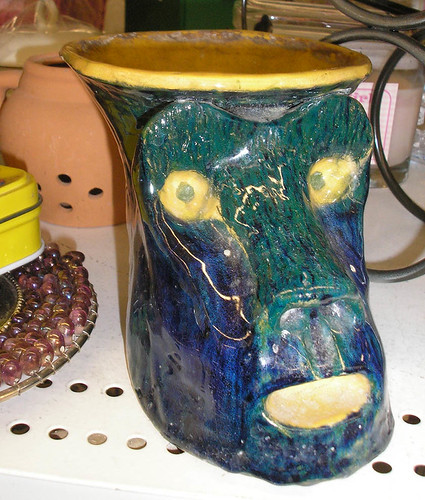 Maybe it’s some sort of strange funnel, where inspiration, which is ALWAYS a cheerful yellow, at least in medieval iconography, is poured into the top of the head, ruminated in the passages of its ceramic cortex, illuminating the eyes with a sage glow. Then wisdom pours forth from its mouth, in the form of divine scripture or apparently a fine white powder, which is probably significant. This would explain its startled expression–divine revelation is startling, particularly when dumped into an open cranium!

There’s a certain satisfying roundness to this theory, but really, if that was the case, it should have been selling for more than $2.99, even on blue-tag Saturday. So, probably a monkey.

Goodwill on 2222 and Lamar, Austin. Apologies to Kate Capshaw. And monkeys.