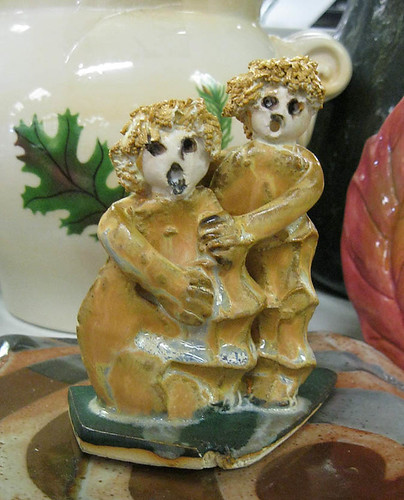 There are moments where Goodwill crosses some invisible line. Where a right-minded person would have said “we shouldn’t sell that, think of the children!” But the sad truth is, Goodwill does think of the children. It thinks, “They need to have their eyes gouged out and their hair styled with non-dairy creamer.”

I’ve seen a lot of strange things…terrible things…at the local Thrift Emporiums, but few of them inspire actual revulsion. This one is special. 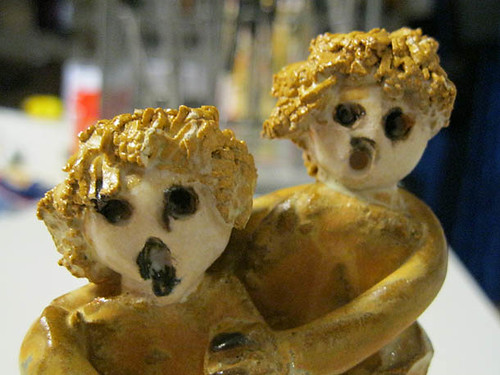 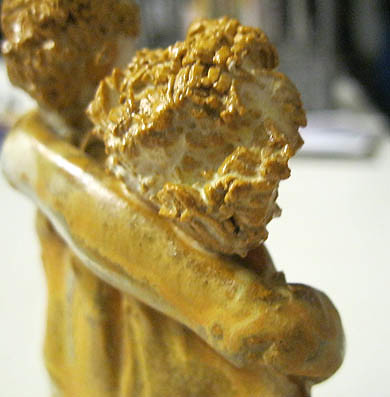 No wonder they look a little shocked.

I was going to begin this paragraph with “here’s the strange thing,” but really, the only really strange thing is why no-one dashed this to the floor in a fit of righteous indignation or violence birthed by pity. But a strange thing, then. See the arm? It’s not really. It looks like an arm, but it’s more of a snake, or a whimsical stole wrapped around two cucumbers in agony. A limp, fleshy tube draped over their shoulders to make them feel more like humans, less like refugees from Munch’s The Scream. A six-foot roll of flesh wearing stage gloves.

And so we leave them, and we leave them screaming in unvarnished horror at the sluglike thing creeping around their back, at the gallons of pale, unwholesome slime dumped casually on them like some sort of demented college prom prank, at their hollow eyes, at being squeezed from clay and cast aside. Goodbye, clay things. Please don’t breed.

Found at Goodwill near 620 and Research. Currently staring at me from the top of my monitor.