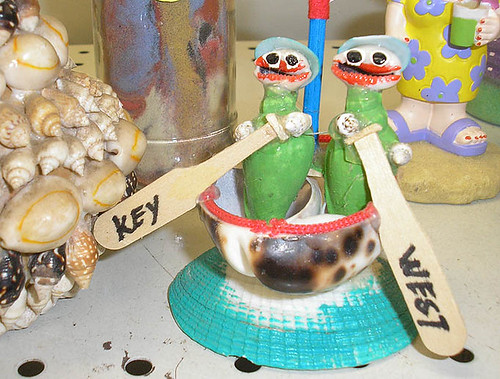 Oh gods, now I’m going to have nightmares about ghastly pirates with bleeding serrated mouths, floating around on a half a clam like a warped alternate dimension’s version of Botticelli’s Birth of Venus.But with skull-faced shell headed radish-like sailors necrotizing periodontitis

Okay, seriously Key West, WTF? I hope, hope HOPE HOPE, that this was some kid’s pet project. Shell art is an impressively tragic medium, but this brings it to an impossible nadir, and I do not know if I’ll be able to recover my faith in late 60s handicraft. You’ve ruined me for cowries forever, Key West. Mary, mother of God.

There is the smallest chance that this is actually representational art. 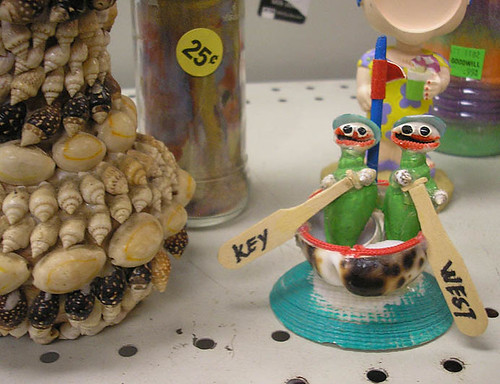 Someone who’s been to Key West tell me–do horrid shell-demons putter around the bay in a half-conch, like witches riding in an eggshell, along the shoals of massive spiralling pillars of shell-encrusted reef? DO THEY? And when they do, do they take their official, licensed Key West oars?

In their defense, they might be trying to get away from the faceless mu-mu-demon behind them, paddling as fast as their tiny little univalve mollusk carapaces can carry them. Row! Row faster! It’s got a fruity beverage and it wants our faces!

Key West is a frightening place :(